Over the past few days, the Big 10 has seen two of its biggest stars decide to forgo the college football season and prep for the NFL draft. First we saw Minnesota’s Rashod Bateman decide to sit, and then Penn State linebacker, Micah Parsons made the same decision. Parsons is one of the highest rated draft eligible players for the upcoming NFL draft. We have seen enough of Parsons where sitting out a full season will not hurt his draft stock. He is an incredibly athletic player, who always seems to be around the ball. He will be one of the first players called in the next NFL draft and can help anchor a defense for years to come. 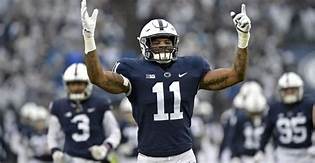 Parsons just finished his sophomore campaign in Happy Valley. After committing to the Nittany Lions, he reopened his recruiting for a brief time, but ultimately decided to sign with James Franklin and Penn State. The Nittany Lions actually had a commitment from Justin Fields in the same class before he burned them for Georgia. If Fields was the QB at Penn State, they would have at least one College Football Playoff appearance under their belt. Parsons led a talented group of linebackers in his two years. He continued on the legacy of Lavar Arrington, Paul Posluszny, Dan Connor, and Sean Lee. Penn State historically has good linebackers and Parsons is near the top of the list.

Parsons finished his college career with 192 total tackles, 19 tackles for a loss, and 6.5 sacks. He was almost always the best defensive player on the field every Saturday. He was always around the ball and always found a way into the backfield. Parsons will make a defensive coordinator extremely happy when his name gets called.

Parsons will be a top-10 pick in this upcoming NFL draft. He is a prime target for the New York Giants. The Giants have not drafted a linebacker in the first round since Carl Banks. Parsons could end that streak and immediately be one of the best defensive players the Giants have. Adding him to a core of Dalvin Tomlinson, Dexter Lawrence, Xavier McKinney, and Jabrill Peppers would certainly start turning that defense around. He can get to the quarterback, stop the run, and play a little coverage. He will make an immediate impact on the field and will drive opposing coaches crazy.

As a Penn State fan, I am disappointed one of the best players on the team will sit out this season. However, there is no way anyone can blame Parsons. He certainly will not be the last star player to opt out (Trevor Lawrence?). He needs to focus on getting himself ready for the NFL, and a big part of that is ensuring he stays healthy. Penn State will miss Parsons, but like always, they always have a strong group of linebackers waiting for their chance.