So many sports have wild award histories. Some are glorious foreshadowing to a blossoming career (2006, MLB Rookies of the Year, Justin Verlander and Hanley Ramirez). Others seemed right at the time, but may have aged poorly in hindsight (both of Steve Nash back-to-back MVP’s probably should have gone to Shaq and Kobe).

They say hindsight is 20/20, but there’s a little bit of haziness in how we look back. Some sports moments and seasons are ingrained permanently into our memories. The emotional equivalent to a tattoo, or a cringe-worthy moment of your childhood that’s never truly forgotten.

This is part 2 of my (potentially endless) blog series of revisiting sports-related accolades and moments from a revisionist’s perspective. Here’s the inaugural blog of this subject, where an explanation was provided on Why Carmelo Anthony should have won the 2003-2004 NBA Rookie of the Year award over LeBron James.!

Award voters and fans make mistakes, and may even defend those mistakes to this day. I hope you open your mind (and your hearts) to the harsh reality I’m about to bestow upon you:

Mark McGwire should have won the 1998 NL MVP over Sammy Sosa.

After ESPN’s ‘Long Gone Summer’ documentary on the 1998 home run race, the home run heavy steroid-era is all baseball fans can talk about. Obviously MLB and the owners have intentionally botched any chances of having live-baseball thus far in 2020, so this is what we’ve got. While watching the doc, my mind couldn’t help but ponder on one minor detail to the season’s close. Who ended up winning the 1998 NL MVP? As one might imagine, it was largely a 2-dog race, between Mark McGwire and Sammy Sosa. As many remember, Sosa ended up winning the NL MVP that year. But should he have?

First things first, steroids. For the sake of this debate, I don’t care who did them in 1998, or how much they did. As far as I’m concerned, it’s safe to assume nearly everyone was juicing – so no point in espousing some righteous argument claiming Moises Alou was the true pick for MVP.

Now, let me field some basic questions / re-torts I would anticipate in a Old School style debate:

Why yes, I was! While I can’t pretend to have watched a ton of the St. Louis Cardinals as a young child living in Rhode Island, I’m very familiar with the summer of ‘98. For a kid who was only so-so at playing the game of baseball, I’ve been locked into following the game since the late 90s and early 2000s. In fact, pertaining to 1998, I have a gold commemorative baseball card of McGwire’s 62nd home run, to this day!

2. Sammy Sosa played for a much better team in the Cubs!

First off, the Cubs weren’t better than the Cardinals by too much.

In 1998, the Cubs went 90-73, compared to the Cardinals’ 83-79 record. For those math gurus puzzled reading those records – you’re right be confused. The Cubs played a 163rd game against the San Francisco Giants as a tie-breaker for the NL Wild Card spot. The Cubbies won, and as a result, they made the playoffs. That’s only a 6 and a half game distance between Chicago and St. Louis in terms of NL Central divisional standings. It’s not like the Cubs won 110 games because of Sosa.

3. The Cubs made the playoffs though – team success matters!

This above picture of Sosa celebrating in ’98 is sick – including it in my re-tort probably hurts my argument, but I don’t care.

Awesome celebratory photos aside, when it comes to MLB’s MVP award, team fortune shouldn’t even play into it! Actually – when it comes to individual baseball awards in general, team records don’t even matter! Alex Rodriguez absolutely deserved the 2003 AL MVP, despite his Texas Rangers only managing 71 wins. In fact, A-Rod also deserved the 2002 AL MVP over Miguel Tejada! Why? Well, for the sport of baseball, a single player’s impact can only do so much for a team’s overall record. As a result, the league’s best player or MVP can certainly be on a crappy team.

In basketball, where each team only has 5 players on the floor at any given moment, all with the ability to make a play and affect the game during nearly any moment. Simply put, individuals make more of a direct impact in basketball. Rightfully so, team success has more of an influence on the NBA awards than it does for baseball.

In baseball, even the Cy Young award has a history of awarding starting pitchers with losing records on the season! Why? Because the ‘win’ is a flawed stat with a heavy influence of the overall team’s success. Should back-to-back NL Cy Young Award winner Jacob deGrom of the Mets be punished for his teammates’ inability to score runs? No! The same logic can be applied for elite hitters that are individually performing at the highest level.

4. McGwire may have won the home run crown, but Sosa was the more complete hitter/player.

While over the course of their entire careers, this may be true, but just in terms of the 1998 season? I’d beg to differ! Here are their standard and advanced stat lines, per Fangraphs.com.

Included at the end of this line is wRC+ and wOBA, stats many might not be familiar with, but show a distinct difference between players. wRC+ is ‘weighted runs created’ quantifying a player’s total offensive value via runs created. wOBA, or ‘weighted on-base average’, is a measure of offensive contributions per plate appearance. Both stats adjust for league and park factors. That park-adjustment attempts to nullify the impact of Sosa and McGwire playing at different parks, where some may be more hitter-friendly than others. McGwire holds the advantage in both of these advanced stats that adjust for out-of-control factors, such as park, and teammates’ contributions.

I hesitate to weigh too much influence on WAR (Wins Above Replacement) as the definitive stat to influence debates between players. Yet, the difference between McGwire’s WAR of 8.5 compared to Sosa’s 7.1 is nothing to scoff at. It’s not a perfect metric but serves as a nice overarching measure taking into account multiple aspects of the player’s season.

5. Don’t be lazy and let WAR be the leading factor on picking an MVP!

While I take WAR into consideration, it’s not the end-all-be-all metric. Sabermetrics for the late 90s are lacking overall, so advanced metrics are limited for MLB’s 1998 season. Let’s put it this way, Mark McGwire literally has no batted ball data from his entire career on Fangraphs. That being said, here are some telling advance stats and ratios for consideration:

McGwire essentially sweeps across the board here, other than the aforementioned AVG (and speed score, which doesn’t matter much for MVP). McGwire’s discipline at the plate is what separates him from Sosa. Walking in 23.8% of plate appearances is quite impressive. That patience at the plate drives up both his OBP (on-base percentage) and OPS (on-base percentage plus slugging percentage).

OPS is probably the darling simple to explain stat we have to work with, and is often pretty telling. Mike Trout stans will be shouting Trout’s the GOAT for decades after he retires, mainly because of his out of this world career OPS. Back in 1998, the league leader in OPS was McGwire, at 1.222. The next closest in OPS was Larry Walker at 1.075, and Sosa came in 5th at 1.024. Additionally, Mike Trout, for being a darling in the world of advanced baseball stats, has never had a season with an OPS above 1.100! While his career OPS is lower than Trout’s, McGwire had 6 seasons above that threshold. Big time stuff from the Big Mac.

I would actually argue the opposite to be true. I feel like the NL MVP was Sosa’s consolation prize for not winning the HR crown. Even looking back, it felt like the majority of fans (and perhaps baseball writers) wanted Sosa to win the home run title. As Sosa mentioned himself in the documentary, he believed his charisma differentiated himself from McGwire, and other baseball stars. As a result of these human elements, fans and voters may have been more sympathetic and leaned in his direction.

Beyond accounting for the human aspect of voting for the award, McGwire’s season stats just held up better. Sure, Sosa had way more steals as well as a few other counting stats (RBI, runs). But now, in 2020, baseball writers and statisticians realize that certain ratios matter more than those counting stats skewed by the context of a team’s overall success. These ratio-based stats tend to be far more indicative of representing a player’s individual on-field impact.

7. The answer between Sosa and McGwire is… neither! Barry Bonds should be 1998 NL MVP.

While Barry Bonds’ 1998 season for the Giants is impressive, he wasn’t the ’98 NL MVP. First off, yes he had a great season with some awesome numbers. Bonds’ WAR may have been slightly higher than McGwire, but his season wasn’t what saved baseball that summer! MLB was on the brink of obscurity following the shortened 1994 season and labor disputes. Fans weren’t happy. Players weren’t happy. The game of baseball was in dire straits until Sosa/McGwire’s 1998 home run race reinvigorated fans! Bonds’ 37 home runs in ’98 is still impressive, but not even close to being in the HR race. While Bonds made his impact on the home run record a few years later, 1998 belonged to McGwire and Sosa. 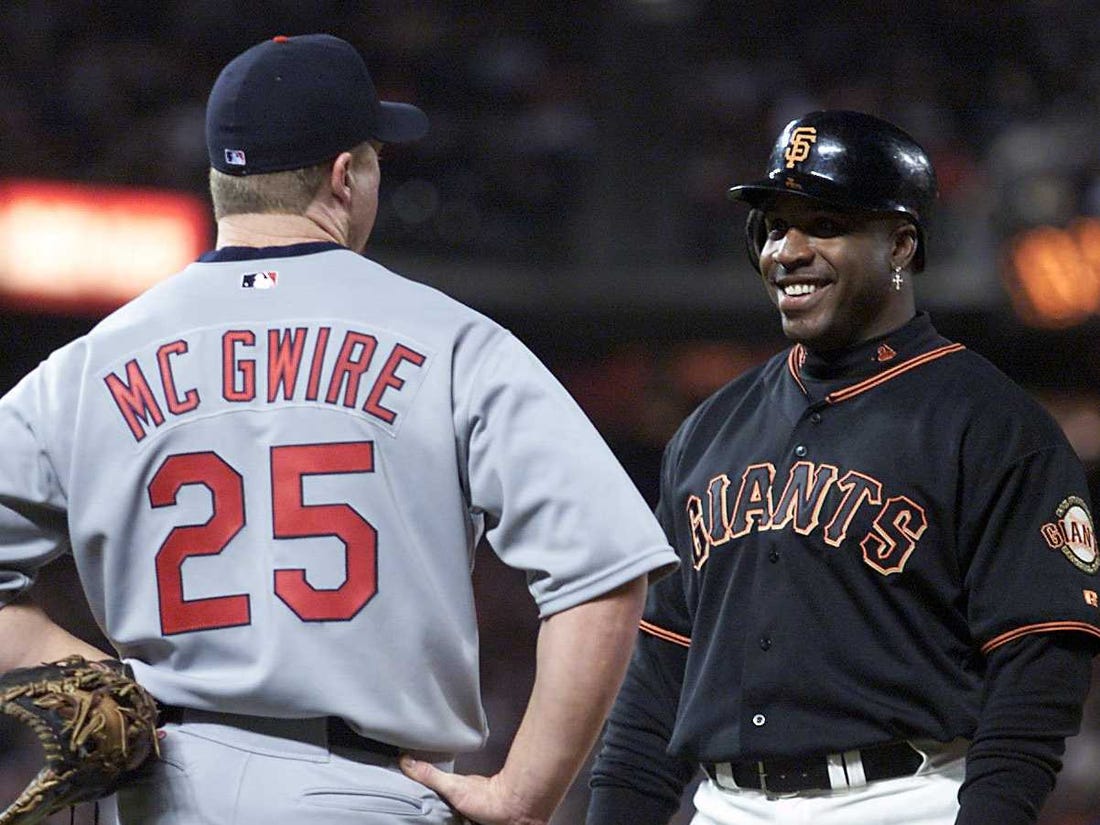 Bonds’ advantage in WAR (8.5) is likely a classic example of the metric weighing fielding and baserunning ability too much in comparison to a slower big fella 1st baseman like McGwire. Do those aspects matter? Sure – but in terms of the MVP conversation, Bonds’ defense shouldn’t be a driving factor. Per Fangraphs, Bonds’ offensive rating (batting and baserunning combined) was 62.0, and his defensive rating (fielding stats and difficulty of defensive position factored in) was 3.1. Comparatively, McGwire’s offensive rating was 90.6 (Holy Toledo, Batman) – and defensive rating -25.1. Sosa, for context, had an offensive rating of 53.8, and a defensive rating of -4.0. Therefore, with all of this in mind – I’m still taking McGwire over Bonds with those factors in play! Let Barry Bonds rightfully claim those other 7 MVPs throughout his career – 1998 wasn’t his MVP award to win.

Growing up, I preferred Sammy Sosa and his entertaining personality that came out in his style of play. However, upon further review, I genuinely believe Mark McGwire had the superior season and should have been your 1998 NL MVP.

Does McGwire winning the 1998 NL MVP impact either Sosa or McGwire’s legacy? Maybe, but by my estimation, nothing significant comes of flipping the award from Sosa to McGwire. Both have smeared reputations from being known steroid-users, and have/had slim chances of making the Baseball Hall of Fame. McGwire is no longer eligible, after 10 years of failing to receive votes on 75% of ballots. Sosa however, still hangs on for 2 more years of Hall of Fame eligibility. Sosa being elected is highly unlikely, after 8 years of barely maintaining above the minimum percentage required to stay on the ballot the following year. But one might assume that without his lone MVP award, back in 1998 Sosa could have fallen off the ballot years ago. For now, the ‘98 NL MVP, Sosa is patiently sitting, waiting, wishing (and praying) for that Hall of Fame call.*

(*I spent 15 minutes working on a lame photoshop of Jack Johnson’s cover art for the single, ‘Sitting, Waiting, Wishing’ with Sammy Sosa on it. It took that long for me to realize that the cover art for the popular single isn’t well-known. So instead, you get the corny reference without the pointless photoshop hack job that would make you scoff.)

Historians, fans, and BBWA please heed my ruling and revise your history books and trophies accordingly.

Stay tuned for more possible blogs on more of my suggested historical sports revisions, served with a heavy dosage of hindsight throughout 2020.