After a week hiatus, we are back with our Backyard Baseball series. We have covered the entirety of the National League. We moved from the NL East, to the NL Central, and then to the NL West. Starting this week, we start with the American League. Once again, we will move from East to West. Therefore, today we will be answering, who would represent each team in the American League East in a new Backyard Baseball game?

This is a hard one to start with. The Orioles roster is not very good and there really is no obvious choice here. Manny Machado was traded away years ago and Cal Ripken hasn’t been an Oriole in 20 years. However, they do have one of the most exciting pitchers in the game: John Means. Means has thrown one of the six no-hitters so far this season and would represent the Orioles in a new Backyard Baseball game. Trey Mancini is another viable option, but Means is the best player on the Orioles this season and deserves to get a cartoon version of himself as a kid.

Xander Bogaerts joins fellow Red Sox shortstop, Nomar Garciaparra, as players to represent the Red Sox in Backyard Baseball. It would have been Mookie Betts, but um… yeah. Xander has been one of the best players in all of baseball this season and has played himself into MVP consideration in the American League. He has already accumulated 2.6 WAR and is on-pace for a career high in the category. He and JD Martinez have been leading the charge for the first place Boston Red Sox. It is only fitting that the best shortstop Boston has had since Nomar represent the squad the same way Nomar did.

The Yankees have historically had two players represented in Backyard Baseball. In Backyard Baseball 2003 (the best version of the game) Derek Jeter and Jason Giambi were the team’s representatives. $300 million man Gerrit Cole gets the nod in this new version of the game. We need some elite pitchers in this game and Cole will join fellow New Yorker, Jacob DeGrom as the top pitchers in the game. Of course he will not be as good as Jake, but an elite option to have on the bump. 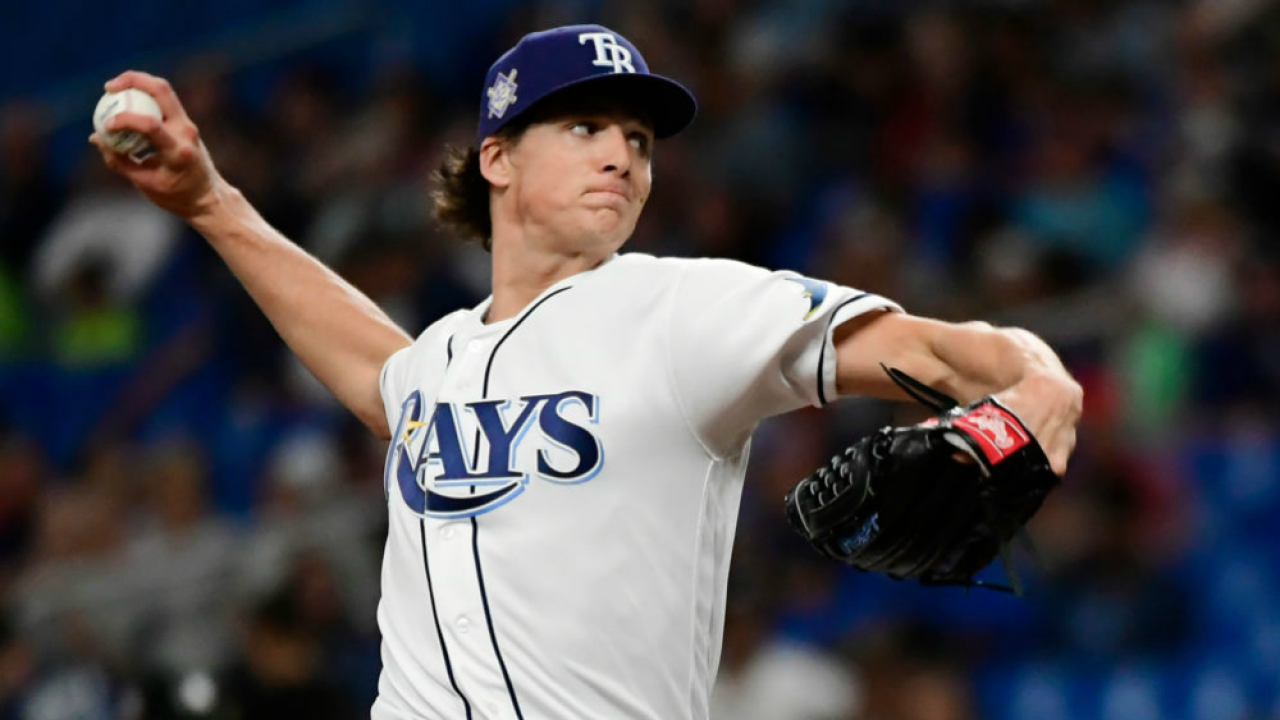 Getting Tyler Glasnow for Chris Archer would have been a steal in itself. However, the Rays also got Austin Meadows in the deal as well. Glasnow has turned into one of the most electric arms in the game. He features a high 90s fastball and devastating secondary pitches. I hear he throws a decent elevator pitch as well.

We have our first father-son combo entering the chat. Vlad Sr. was the representative for the Montreal Expos back in the day. Now his son is representing north of the border as the representative from the Toronto Blue Jays. Vlad Jr. joins fellow powerful Blue Jays first baseman, Carlos Delgado as Blue Jays representatives. He’s not going to carry the best fielding or running stats, but will be near the top of the list for hitting. The young gun carries a lot of pop in that bat and has demonstrated that throughout his major league career.

There we have it, your five representatives from the American League East. This is a very pitcher heavy division, but you have to have the arms represented. There is a lot of pop in the bats that are represented. You have the father-son combo in Vlad Sr. and Vlad Jr as well as one of the best shortstops in the game in Xander. We only have two more divisions to cover before we found all 30 representatives. Next time we will move west bound and make a stop in the AL Central.