Emmitt Smith is definitely known for his time in Dallas with Troy Aikman and the Dallas Cowboys. In his 13 year career with the Cowboys, Smith rushed for 17,162 yards and 153 touchdowns. He also had 486 receptions for 3,012 yards and 11 touchdowns while in Dallas. Smith Went on to finish his career as the league’s all-time leading rusher, do you remember that it was with the Arizona Cardinals and not the Cowboys? 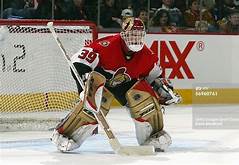 Dominik Hasek is widely considered to be the best goalie in the history of the NHL. He did most of his damage as a member of the Buffalo Sabres and Detroit Red Wings. But raise your hand if you remember his stint in Ottawa? Hasek played 16 seasons in the NHL. He played 9 seasons with the Sabres, 4 with the Red Wings, 2 with the Blackhawks, and only 1 with the Senators. In his year in Ottawa, he won 28 games as a 41 year old. He is near the top of the leaderboard with 6 Vezina trophies as the league’s best goalie. His number hangs in the rafter in Buffalo, but for some reason, I can’t get the above image out of my head.

Next on the list is Tracy McGrady. McGrady is known for a few things; being Vince Carter’s helper in his famous slam dunk contest and scoring 13 points in 35 seconds. He was one of the best players the league has seen but his career was held back due to injuries. Being best known for his time in Orlando and Houston, McGrady spent part of the 2009-2010 season with the Knicks. In his lone “season” with the Knicks (only played in 24 games), McGrady averaged 9.4 points per game.  As a Knicks fan myself, he is definitely one player I wish the Knicks had while in his prime.

Last on the list is the Kid. Griffey is obviously most famous for his time in Seattle and even his time in Cincinnati. Who here remembers that he suited up for the White Sox at the end of his career? Griffey is one of the best players the MLB has ever seen. Not only did he flash excellent leather in CF, he hit over 600 home runs and was the first #1 overall draft pick selected to the Hall of Fame. On August 31, 1990, Ken Griffey Sr. and Jr. became the first father-son teammate combination in MLB history.

In 22 MLB seasons, Griffey Jr. hit 630 home runs while playing for the Mariners, Red, and White Sox. He only played 41 games with the Sox and hit 3 home runs and drove in 18 runs over in that span. Griffey ended up back in Seattle to finish his hall of fame career, but it sure is weird looking at those 41 games as a White Sox.

I love writing these types of articles. Looking back into sports history and some of its greatest stars has been an amazing experience. As a relative youngling, there are some players that I associate with what others would deem weird. For example, I always thought of Ray Bourque as an Avalanche rather than a Bruin when I was growing up. Obviously, I know now that is the complete opposite. Definitely look for a part 3 of this series to come out in a couple weeks. I will continue to stay away from Jordan and the Wizards because everyone knows about that. But, tune in in a couple weeks for part 3 of “They Played for Who?”