A lot of us play fantasy sports and dream of getting the first pick. To have the opportunity to choose literally any player and have them be a part of your team. Now, what if that happened in real life? What if Major League Baseball decided to re-set and do a fantasy draft? Who would be the first overall selection? It is important to note that this is not like fantasy baseball where it is a one and done season. I am taking into account age, contract situation, injuries, and everything else that real GM’s have to take into consideration. There are so many options, and I could not really come to a true decision so here are five players who could be worthy of being the first selection (in really no particular order).

It would be very hard to not at least consider Shohei Ohtani for the first pick in a Major League Baseball fantasy draft. The man can do literally everything on a baseball field. At 27 years old, Ohtani led the majors in WAR last season with 9.1, leading to his first MVP award. The man can hit 100 on the gun with ease and then step up to the plate and launch 400-foot dingers. He hit .257, carried an on-base percentage of .372, and slugged .592. Ohtani also had an OPS+ of 158. This is your reminder that a league average OPS+ is 100. He did all of this while also going 9-2 with a 3.18 ERA and 156 strikeouts in 130.1 innings pitched. Ohtani can simply do it all on the baseball field. 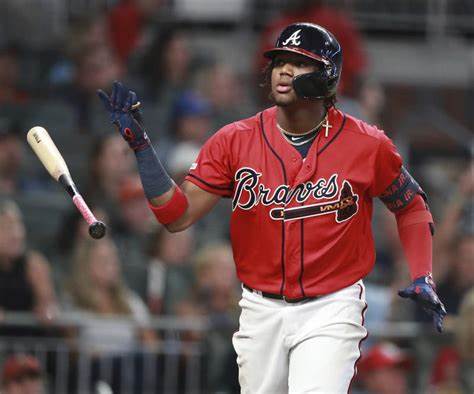 Ronald Acuna is one of many super young superstars the game has right now. Acuna only played 82 games last year for the Braves before he tore his ACL. However, in those 82 games, Acuna hit .283 with a .394 OBP and a .596 slugging percentage. For those that look more at traditional counting stats, Acuna hit 24 home runs and drove in 52 runs in just those 82 games. He plays an excellent outfield and would be an anchor in your team’s lineup for many many years.

One of the biggest advantages to picking Acuna is that he is already locked into a very team friendly contract. Acuna is only 24 years old and will not be a free agent until 2027. That means you get at least five years of guaranteed all-star level play at well below market rate. Acuna signed an 8-year $100 million contract back in 2019. He is making well below what a player of his caliber would be making in arbitration. That would be a very valuable asset to have on your team.

Juan Soto is probably the best overall hitter in baseball right now. For his career, Soto is hitting .301 with an OBP of .432 and a slugging percentage of .550. Those numbers are simply absurd. Friendly reminder that Soto is also only 23 years old. In the day and age of increased strikeouts and deceased plate discipline, Soto has mastered the art of hitting like only few others. Soto is one of four players to eclipse a 20% walk rate in a season before their 26th birthday. He is on a list with Babe Ruth, Mickey Mantle, and Ted Williams. I say that is some pretty good company. Soto is just now entering his first year of arbitration so he is still getting paid well below what he should be making. However, when the time comes for him to get a new contract, he will most likely set the new record for total dollars.

You may be wondering to yourself why would a player who hasn’t even had one full season in the big leagues be on this list. The answer is really pretty simple; Wander Franco is that good. In only 70 games for the Rays last season, Franco accumulated 3.5 WAR, as a 20-year-old. As a rookie, he had a .347 OBP and a .463 slugging percentage. He had an 80-hit tool on his scouting report and has lived up to that expectation. Like Acuna, Franco is signed to a long-term contract. He is under contract through the 2032 season with a team option for 2033. The total value for the contract is $182 million. That is a very wise contract for the Rays. Franco will absolutely outperform that contract and play way above what he is being paid. That is the type of deal you want to start your franchise with.

Tatis is probably my least likely selection out of these five guys. Tatis is an electric player when on the field but has shown some struggle to stay healthy. That shoulder issue he has could be a long-term red flag. However, there is no denying what Tatis can do on the baseball field when fully healthy. Next to Ohtani, Tatis might be the closest thing baseball has to must watch TV. He hit .282 last season with a .364 OBP and .611 slugging percentage in 130 games. Tatis is not that great of a defensive short-stop with -6 defensive runs saved, but he more than makes up for that with the bat. He accumulated 6.1 WAR last season while hitting for tremendous power and getting on base quite a bit. Tatis does come with the heftiest price tag immediately as he signed a 14-year $340 million contract which has him signed through the 2034 season. With Tatis, you get an electric player who may be the game’s best when fully healthy, and for the next 13 seasons guaranteed.

I would love to know your thoughts on my list, if you would include anyone else or substitute another player for one of my choices. Baseball has a lot of very young and very elite talent right now. The five I mentioned above make baseball a fun game to watch. We need more players like Ohtani who can do it all and Tatis who is not afraid to break the unwritten rules. These guys are the face of baseball and will be for many years to come. Who would you take in a Major League Baseball fantasy draft? The choice is certainly not easy.