It was a very disappointing season for the Penn State Nittany Lions in 2021. They started the season ranked in the top 10. However, they started the season 0-5 and it was a bad 0-5. They lost a tough game at Indiana to start the season, got blown out by Maryland at home, and got blown out by Iowa at home. Penn State managed to turn their season around and win their final four games, including an impressive win at Michigan. They closed out the season looking like the team many people, including myself, thought they were. I pegged them to be Ohio State’s biggest challenger in the Big 10 last year. Obviously, I was wrong, but this season is a new season. Let’s breakdown the 2021 Penn State Nittany Lions.

In recent years, Penn State has had one of the best defenses in the country. A big part of that was their linebacking crew and defensive line. Their biggest losses on the defensive line were Jayson Oweh (drafted first round by the Ravens) and Yetur Gross-Matos (drafted second round by Panthers). Both of those players were major game changers in both the run and pass defense. However, Penn State’s biggest loss on defense did not play last year either. All-American linebacker Micah Parsons, opted out of the 2020 season to focus on the NFL draft. That paid off as he was selected 12th overall by the Dallas Cowboys.

Who needs to step up? With three of their most important defensive players now in the NFL, who needs to step up in Happy Valley? This defense starts with the linebacking crew. They have tremendous talent and incredible recruit pedigree in their linebackers. Jesse Luketa, Brandon Smith, and Curtis Jacobs were all at least 4-star recruits (with Smith leading the way with a 5-star rating). Penn State is still waiting for all of them to make major impacts on the field and this is the year to do it. Smith and Jacobs are entering their Junior and Sophomore seasons respectively while Luketa is now a senior. This is an extremely talented group of linebackers and it is time for them to dominate at Linebacker-U.

Like I mentioned above, Penn State lost a lot of talent on their defensive line. They are going to need returner PJ Mustipher to really step up on that defensive front. Transfers Arnold Ebiketie and Derrick Tangelo will also need to make big impacts if Penn State wants to have a formidable front seven like in years past.

Penn State is returning some very important pieces of their offense from last season. Sean Clifford is back under center as one of three scholarship quarterbacks on the roster. Penn State needs much better play from Clifford if they want to compete in the Big 10. He ended up splitting time with Will Levis for a lot of last season. Levis was recently named the started at Kentucky after transferring this offseason. To put it frankly, Clifford needs to improve his accuracy. He missed a lot of receivers last season and threw way too many interceptions for this team to have a chance to succeed at a high level.

Luckily, Clifford will have his two most important receivers from last season back. Jahan Dotson and Parker Washington will be major pieces of this offense. Dotson led the Big 10 in receiving yards last season while Washington made a major impact as a true freshman. These two will dominate targets. However, expect TE Theo Johnson to contribute as well. Penn State has had two big TEs in a row with Mike Gesicki and Pat Freiermuth. Theo Johnson is next in line to be the next big TE out of Penn State. Wide receiver depth is a major concern for the Nittany Lions as there really is no established third option. KeAndre Lambert Smith who played a very minimal role as a freshman last season will need to step up and be the third piece to Dotson and Washington. 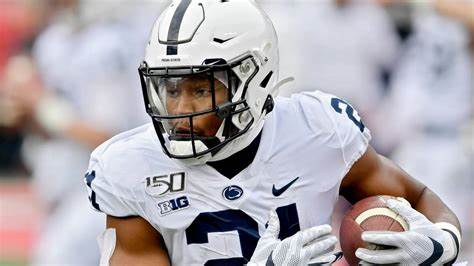 Penn State’s running back room is very talented and very crowded. Both Noah Cain and Devyn Ford missed the vast majority of last season. They both will be back this season and will assume the lead back roles. In their absence last season, freshmen Keyvone Lee and Caziah Holmes made immediate impacts. Lee rushed for 438 yards and 4 touchdowns wile Holmes rushed for 227 yards and two touchdowns. Lee was the team’s leading rusher with those 438 yards. With both Cain and Ford back in the rotation, I don’t really see the team going with a feature back like they did with Saquon Barkley or Miles Sanders his last season. Assuming both Cain and Ford stay healthy, the Nittany Lions should have an extremely effective and balanced ground game with at least four running backs who can rotate in.

As a Penn State fan, I can only hope that the team is more competitive than last season. The silver lining from last season is that they won their last four games and all of them in deciding fashion. That is the team we expected to see and will hopefully this season. There is a bright future ahead for the Penn State Nittany Lions as they currently boast the #1 ranked recruiting class for 2022. James Franklin and staff have done an excellent job on the recruiting trail for 2022 and those guys will look to be impact players as soon as next season. However, we still have a full season to play before we see those guys. He may not be Trace McSorely, but I see big things ahead for Sean Clifford and the 2021 Penn State Nittany Lions.