The Pats proved that they can hang with a pretty good team. The Eagles haven’t exactly been killers this season, but much better than the competition they had faced in the first half of the season. The defense is going to need to hold up the same way against Dallas because it doesn’t look like the offense is going to do well if it’s a shootout. Dallas has had a very high powered offense this season that has been hard to stop. The downfall has always been their coaching, and you know Bill will have a plan to outsmart Jason Garrett.

The Pats offense is going to need to get over their struggles. Coming back home is a great way to get that started. However, it looks like they may be without some offensive weapons, which they are already low on. Phillip Dorsett has a concussion and still has not been cleared for contact, and Mohamed Sanu has been dealing with an ankle injury. This could be a big game for N’Keal Harry to have a coming out party. Dallas plays a lot of zone defense, and Brady can pick zones to pieces. If Harry can find some openings, we might see Brady earn some trust in him. If not, we know that we are going to see a heavy dose of Edelman, and most likely a lot of the running backs like White and Burkhead. If Brady continues to ignore the young guys, then we might get a good game out of a guy he trusts like Ben Watson. This wouldn’t be a bad game to try to get the running game going again too. They keep giving up on it so fast, but Sony Michel really got in a groove last year when the fed him. If they don’t give him the touches, he’s never going to get hot. The running game is how they won the Super Bowl last season, and if they want to win it again, they have to give it a try.

The boogymen proved that they can come back out after Halloween last week. They flustered Carson Wentz and got some good pressure on him. The Eagles might have lost both of their tackles but they took full advantage of it. Pressure on Dak and holding Elliot in check will be keys to this game. If the defense bottles up Dak and doesn’t let him scramble too much then they will be at a great advantage. He has been phenomenal when he gets outside of the pocket all season. Stephon Gilmore v.s. Amari Cooper should be a very fun matchup to watch as well. If anyone is going to keep him bottled up amidst a great season, Gilmore is the guy. Zeke might be impossible to stop, but keeping him bottled up is possible. It’s going to be a big game for the big fellas, Danny Shelton and Lawrence Guy to plug the middle. We also should see a lot more of Ja’Whaun Bentley and Elandon Roberts. They are not the greatest cover linebackers, but they can really come up and fill holes, so they should be a great counter to keeping Zeke down. If the defense shows up again this week, we can really put that Ravens game behind us as a one-off and recognize this defense for how talented they really are. 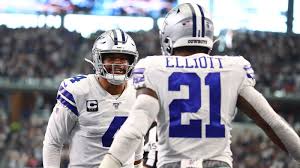 As good as the Cowboys have been at points this season, the Pats just don’t lose at home. I would be shocked to see that happen. Jason Garrett is also a bafoon, and Bill will absolutely not lose to a guy like that. Pats 27-20.