It has been a long time since the Stanley Cup made its way up to our neighbors to the North. A Canadian team has not won the Stanley Cup since the Montreal Canadiens did in their last finals appearance in 1993. Canada’s Stanley Cup drought may be ending this year as the Montreal Canadiens defeated the Golden Knights to advance to the finals. There have been some close calls over the last 28 years, but no one has managed to take home the Cup. Let’s take a look back at the team’s that came the closest to  ending Canada’s Stanley Cup drought.

The last time a Canadian team made the finals was the 2011 Vancouver Canucks. The Canucks brought home the Presidents trophy that season with a league high 117 points in the regular season. It was their first finals appearance since they lost to the New York Rangers in 1994. This Canucks team had an up and down path to the finals. They went up 3-0 on the Blackhawks in round 1, but managed to win the series in 7 games. They disposed of the Predators in round 2 in 6 games with all but one game being decided by one goal. It wasn’t until the Conference Finals that they decided to show their dominance and beat the Sharks in 5 games. It was looking like the Canucks would be able to bring home their first cup in franchise history.

However, as we all know, the Bruins managed to beat the Canucks in 7 games. As a result, Canucks fans decided to burn down their own city after the game 7 loss. The Bruins beat Vancouver 4-0 in game 7 and kept the Canucks from beating their ghosts of finals past.

This was a matchup of relatively young franchises at the time. The Ducks were making their second finals appearance (2003) and the Senators were making their first finals appearance. The Ducks eventually took down the Senators in 5 games and became the first California based team to win the Stanley Cup. The Senators were the only team in the eastern conference to represent Canada in the finals since the ’93 Canadiens. Captain, Daniel Alfredsson was also the first European born captain to lead his team to the Stanley Cup Finals. Trying to hold off elimination, the Senators were no match for the Ducks as they won the series 4-1 with a 6-2 victory in game 5. 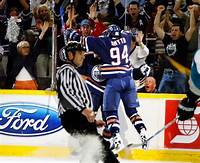 I know what you are thinking. The Oilers made the finals without Wayne Gretzky and Mark Messier? I know, it is super weird. This was the Oilers first finals appearance since 1990, but they fell to the Hurricanes in 7 games. This was the Hurricanes second appearance; the first being in 2002 when they fell to the Detroit Red Wings. This Oilers team made history as they were the first #8 seed in NHL history to play in the finals. They beat the Red Wings in 6 games, the Sharks in 6 games, and finally the Ducks in 5 games to keep their Cinderella hopes alive. Ultimately, they fell to the Hurricanes in 7 games and have not sniffed the finals since.

The Calgary Flames met the Lightning in their first finals appearance since they brought home the Cup in 1989. This was the Lightning’s first finals appearance and they managed to win in 7 games. The Flames beat the Canucks in 7 games, the Red Wings in 6 games, and the Sharks in 6 games to become the first Canadian team since the ’93-’94 Canucks to make it to the Finals. Calgary actually had a 3-2 lead through 5 games and had a chance to bring home the Cup in both games 6 and 7, but the Brad Richards and the Lightning clawed their back and brought home their first cup in franchise history.

Here we have our only repeat offender on this list. The Canucks have the most finals appearances out of any Canadian team since the last time one brought the Cup up north. The Canucks were a Cinderella team themselves as they were the 7 seed in the West that season. The Rangers meanwhile were the President’s Trophy winners and were the easy favorites to win. However, the Canucks managed to come back from a 3-1 deficit and force a game 7. Brian Leetch opened the scoring in game 7 and the Rangers never looked back.

The 2021 Canadiens will have a very tough matchup when they face either the Islanders or the Lightning. This is a very good Canadiens team that is playing their best hockey of the season when it matters the most. Personally, I would love to see the Canadiens beat the Islanders or the Lightning. It’s time for some Canadian team to step up as we all the know the Oilers and the Leafs are incapable of doing so. Canada’s Stanley Cup drought may be coming to an end, and it is all in the Canadiens hands.