Two of North America’s greatest sports stars are having their careers wasted. Connor McDavid of the Edmonton Oilers and Mike Trout of the Los Angeles Angels have been the brightest starts of their respective sports but both have nothing to show for it. Both players are perennial all-stars, MVP winners, and single handedly win games for their club, but have minimal playoff appearances combined. Let’s take a look at the careers of these two superstars and what can be done to help them win.

Connor McDavid was the first overall pick in the 2015 NHL Entry draft. From 2010-2015, the Oilers picked first overall in four of the six drafts, including three times in a row in 2010, 2011, and 2012. The picks those years were Taylor Hall, Ryan Nugent-Hopkins, and Nail Yakupov. After picking first three years in a row, the Oilers picked first once again in 2015 and thought they were getting their savior in McDavid.

He was hyped up like no other player in recent memory. He was considered the best prospect since Sidney Crosby, and he has lived up to the hype. The only problem is, every other first overall pick, has not played to the caliber that first picks should. Taylor Hall has won a Hart Trophy, but that was after he was traded to the Devils for Adam Larsson. Nail Yakupov is now playing in the KHL.

In addition to McDavid, the Oilers have Hart Trophy finalist, Leon Draisitl. Draisitl led the NHL in points before the shutdown with 110. Even with two of the best players in the league, the Oilers lost to the Blackhawks in the 24-team qualifying round.

This just hurts to watch pic.twitter.com/kdRSD3xM3r

McDavid has done everything he can to help the Oilers win. However, without much of a supporting cast outside of Draisitl, he can only carry them so far by himself.

And he does a good job by himself; imagine if he had competent teammates. 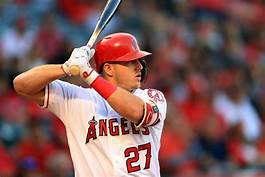 Ever since Trout made his debut, he has been the best player in the bigs. Trout won AL rookie of the year, 2 AL MVP awards, and has been a seven time all-star. He leads the league in WAR almost every season and has already accumulated a higher career WAR than Derek Jeter. They have only made the playoffs once in his career after they won 98 games in 2014. They went on to get swept by the Royals in the ALDS.

The Angels have tried to win since Trout came up. They signed Albert Pujols to a ridiculous contract. They then went on to sign Josh Hamilton and CJ Wilson in the same offseason.

Even then, the Angels only have one playoff appearance with Trout. Most recently, they signed Japanese phenom, Shohei Ohtani, a couple years ago, and signed Anthony Rendon this past offseason. Combined with David Fletcher and Andrelton Simmons, the Angels should definitely be able to score runs. The main concern with the Angels is their pitching. In 2019, the Angels had a team ERA of 5.12. In 2018, they had a 4.15 team ERA, and in 2017, they had a 4.20 team ERA. The Angels finished below league average in ERA in both 2019 and 2018. If they want to succeed soon, they need to address their pitching.

Both McDavid and Trout have been one of the best players in their respective leagues ever since they made their debuts. Both players have been surrounded by high draft picks or marquee free agent signings that simply did not work out. The Oilers need to find a better bottom six as McDavid and Draisitl have been doing the heavy lifting in the top six. The Angels have spent a lot of money on offensive free agents that did not work. They spent big on Rendon this past offseason when many analysts thought they were the frontrunners for Gerrit Cole. The Angels desperately need to improve their pitching if they want Trout to get back to the playoffs. Talents like these two do not come around often, and it is sad to see such talent being wasted.