With the loss of gate revenues from the NHL playoffs, the salary cap is expected to remain at $81.5 million for the next two seasons. There is a chance after those seasons, it could rise a small amount. Lydia just wrote a great blog about how that salary cap affects the Bruins. Today, I am going to take a long look at how the flat cap will affect my team, the New York Rangers. 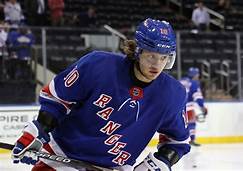 The Rangers are going to have some very tough decisions to make this offseason. For example, what do you do with players like Ryan Strome, Jesper Fast, and Tony Deangelo? Strome and Deangelo are poised to be restricted free agents this offseason. Fast on the other hand, is going to be a UFA. Strome played most of the season on a line with Panarin, so naturally his stats are above anything he’s produced before. Furthermore, Deangelo put up some fantatsic numbers as one of the top offensive defenseman in the league this season. His defense needs some work, but when you have guys like Jacob Trouba and Adam Fox, you can limit Deangelo’s time on ice in defensive situations.

The two big decisions the Rangers need to make include Marc Staal and Henrik Lundqvist. Staal and Lundqvist are the two longest tenured Rangers and both carry heavy cap hits. Lundqvist carries a $8.5 million hit while Staal has a $5.7 million. The silver lining with these two is that their contracts are up after next season. However, these two are the biggest cogs in trying to assemble a team next year.

The Rangers have utilized the buyout process fairly frequently over the past decade. Some notable players the Rangers have bought out include Chris Drury, Brad Richards, Dan Girardi, and most recently, Kevin Shattenkirk. Shattenkirk was on the Rangers payroll for $1.48 million this season and will be on for $6.08 million next season. That is a very heavy cap hit for someone who now plays for Tampa Bay. So this raises the question; do the Rangers buyout any players this offseason in order to create more cap space? The two most obvious answers are Marc Staal and Henrik Lundqvist.

The main problem I see with buying out Lundqvist is the message it sends to players. Lundqvist has been one of the best goalies in the NHL since he debuted. He has played every single second of his NHL career with the Rangers. What message would that send to free agents or draft picks that the team is willing to just kick the best goalie to ever wear a Rangers jersey to the curb? The best way around this issue is to find a trade partner that Lundqvist is willing to waive his no trade clause for. Lundqvist, however, has remained committed to the Rangers despite decreased playing time and going through a full rebuild.

The Rangers will have around $46 million in cap space after next season. That is because they have only 6 players with contracts that run through that point (as of now). That list includes Panarin, Mika Zibanejad, Jacob Trouba, Chris Kreider, Kaapo Kakko, and Adam Fox. Everyone else is either a UFA or RFA after next season. That gives the Rangers a ton of room and flexibility. However, Filip Chytil, Igor Sheshterkin, Brett Howden, and Pavel Buchnevich will all need new contracts by then. And that does not include what Ryan Strome and Tony Deangelo get this offseason. They also have to worry about the expansion draft for the new Seattle team. The Rangers accelerated their rebuild with Panarin, Kakko, Fox, and Trouba last offseason. It will be very interesting to see how Jeff Gorton and John Davidson continue to construct this team to win the Stanley Cup.