The Struggles of life as a Mets Fan

I have been a Mets fan for my whole life. I bleed orange and blue, and if I could choose one of my favorite teams to win a championship in my lifetime, it would be the New York Mets. Playing under the bright lights of New York and in the shadow of their brothers from the Bronx, the New York Metropolitans have a passionate fan base that is dying to see them get back to the postseason and win their first World Series title since the ball got through Buckner in 1986.

The Mets have never won the World Series in my lifetime, but I have been blessed with a whopping two appearances in my 24 years of life. I saw them lose in game 7 of the NLCS because Carlos Beltran refused to swing (Yeah, I know it was a nasty pitch but I can still be salty). 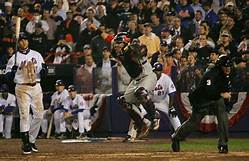 They collapsed at the end of 2007 and 2008, and lost to the Marlins on the final day of the season both times. Sports Illustrated predicted them to win the World Series in 2009 when they went a rocking 70-92. 2009 is one of my favorite seasons to look back on. On a team that had Carlos Beltran, Carlos Delgado, David Wright, Gary Sheffield, and Jose Reyes, DANIEL MURPHY led the team in home-runs with 12. Players did not care about launch angle until years later.

Then 2013 happened when Matt Harvey seemed like he was going to throw a no-hitter every time he pitched, aaaannnnd then he tore his UCL and had Tommy John Surgery.

The Ups then downs

Then came 2015, arguably the best year of my sports fandom life. The Rangers came off of a Stanley Cup Finals appearance and won the Presidents Trophy, while the Mets somehow won the division and made it to the World Series. I could ramble on for days about the final days of July when Wilmer Flores cried on the field and we acquired Yoenis Cespedes from the Tigers at the trade deadline, but I don’t want to bore you. The playoffs that year were magical. We beat the Dodgers in 5 games and then swept the Cubs to only have my heart ripped out again because Lucas Duda can’t throw a baseball accurately from 90 feet.

Conor Gillaspie tore my heart out in the Wild Card game in 2016 when we lost to the Giants (I mean it was an even year so of course that happened). 2017 and 2018 were stinkers once again, and then 2019 was a step in the right direction. Michael Conforto had his jersey ripped off (with no bad tattoos may I add).

Pete Alonso had a historic season, and Cy Young himself, I mean Jacob Degrom, once again made hitters and Max Scherzer look silly. Even though it was a season with a lot of positives, Edwin Diaz and Jeurys Familia still forgot how to get hitters out. A season where we ended with 86 wins, but could have had 99 if they converted just 50% of their blown saves.

And all of that brings us to 2020. The Mets have the third best odds to win the National League Pennant, and according to FanGraphs projections, will win the division at 88 wins. With a dominant rotation, a healthy Robinson Cano and Dellin Betances, and bounce back years from Familia and Diaz, we could be looking at your National League representative to play the Twins in the Fall Classic. How excited should I be? I should be really excited, but if history has taught me anything, you never know what can happen with the Lovable Losers from Queens.

Follow this link and signup for Seated. The restaurant reservations app that will get you discounts and other gifts just for using the app to reserve your table at your favorite restaurants in Boston: seated.s2l3a2.net/c/2016892/705985/10715