Rejoice Buffalo. After five long and painful weeks of not winning a game, the Buffalo Sabres finally won a game after defeating the Philadelphia Flyers by a final score of 6-1. Despite having a 3-0 lead, Buffalo blew their lead and lost in overtime on Monday night. In this article, I’ll give you a recap of what went down last night.

In the first period, it was all Sabres. Have you ever heard the expression, “get pucks to the net”? Well that’s what Sam Reinhart did and got a lucky bounce off of a Flyers defenseman, resulting to the Sabres scoring first.

A couple of minutes later, Curtis Lazar gave Buffalo a 2-0 lead. Riley Sheahan made the goal happened, as he was on a partial breakaway but realized he couldn’t get a shot off. Instead, he pivoted and found Lazar going to net and one timed the puck into the net. The Sabres would be up by two going into the first intermission.

THAT SETUP THO 😍#LetsGoBuffalo pic.twitter.com/4blHmwYpaN 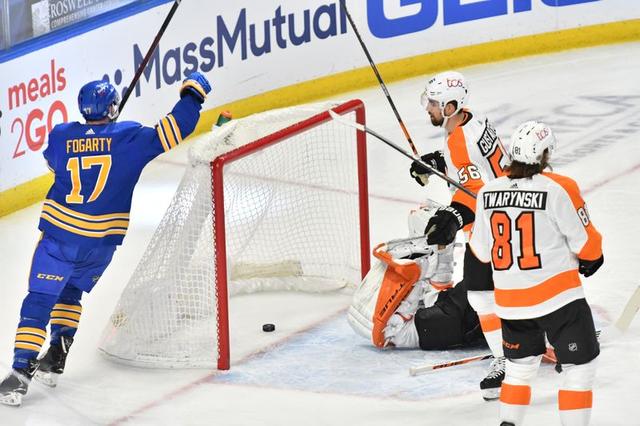 The second period didn’t start well for the Sabres as Philadelphia would get on the board as Ivan Provorov had his shot from the point get deflected off of Sabres defenseman Brandon Montour and the puck went into the net, making it a 2-1 game. Around the halfway point of the period, Buffalo would make it a two goal game again as Steven Fogarty would get his first NHL goal.

Buffalo wasn’t done however as Casey Mittelstadt would find the back of the net, making it 4-1 Sabres. Flyers goaltender Brian Elliott would get pulled and the Sabres were up by three going into the third period.

Going into the third, Sabres fans weren’t satisfied after what transpired on Monday night but the team learned from their mistake and they wouldn’t let the Flyers score again. However, Montour would score twice which ultimately led to the Sabres breaking this dreadful streak. All of Buffalo is Linus Ullmark.

Linus says it all. 🙌 pic.twitter.com/EVWUFOZWvg

The Sabres aren’t going to the playoffs this year but it felt so good to get that victory. After 18 straight losses and tying an NHL record for the longest losing streak which was held by the 2003-2004 Pittsburgh Penguins, the Sabres were not going to be the ones who held sole possession of the record. Buffalo is back at it tonight against the New York Rangers.