Release the Kraken! The long awaited reveal for Seattle’s new team nickname is finally over. The NHL officially welcomed the Seattle Kraken as the 32nd franchise this past week. Go take a look Jess’s piece about it, it’s a fantastic read! Today we are going to take a deep dive into the Kraken, what we know so far, and what we can expect over the next few years before the play a game.

Before we get too far, let’s take a quick look back at the most recent NHL expansion teams. The newest member is the Vegas Golden Knights. They began play during the 2017-2018 season and burst onto the scene. Historically, expansions teams take awhile before they are competitive. The Knights did not get the memo apparently. After making the Stanley Cup Finals in their first season, they have made some high profile trades like acquiring Mark Stone and Max Pacioretty to lead them back to the finals.

Before the Knights, there was a flurry of teams added in the late 90s and early 2000s. In a span of a couple years, the NHL added the Columbus Blue Jackets, Minnesota Wild, Nashville Predators, and the Atlanta Thrashers (now the Winnipeg Jets). The Predators have had the best run of things, especially of late, when they made it to the Cup Finals against the Penguins a couple seasons ago. The league sat an even 30 teams once these teams were added, and then 31 when the Knights came around.

Everything about the Kraken is amazing so far. They have the worlds first zero waste arena in the Climate Pledge Arena. They have some of the coolest jersey designs I have ever seen, and they get added to the list of pro teams that do not end in ‘S’.

This is simply one of the cleanest jerseys I have ever seen. The color scheme is elite, the logo is fire, and the anchor-space needle secondary logo is amazing. There is NOTHING to dislike about this jersey. When I was watching the announcement, I was kind of expecting a logo that looked like the octopus that used to hang in Joe Louis Arena in Detroit. 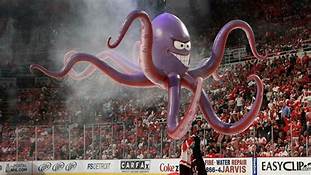 The logo they presented however, is so much better. I do not own a single jersey from a team that is not my favorite. However, that might need to change. I will almost certainly purchase the jersey of the player who is selected from the Rangers during the expansion draft. It would be an elite addition to my closet.

With the recent additions of the Knights and Kraken, it begs the question of what city will get a team next? I was highly critical of the decision to give Seattle a team before the likes of Quebec City. Quebec City has a rich hockey history that has been vacant ever since the Nordiques left for Colorado. Winnipeg got their team back when the Thrashers moved earlier this decade, so if not Quebec then who? No one. That’s who. Quebec needs a hockey team. There is so much passion in that city and we need to revive the Nordique and Canadiens rivalry.

Now that Seattle has their hockey team, and a brand new arena, look for the NBA to either relocate or expand back to Seattle. It is a crime the SuperSonics had to leave. Seattle needs a basketball team so I would not be surprised to hear the NBA make a move there in the next couple years.

Will the Seattle Kraken have the same immediate success as the Golden Knights? Chances are not, but the talent pool that will be exposed will be very deep. If nothing else, they will at least look good when out on the ice. I cannot emphasize enough how good these jerseys are. So far, every thing the Kraken have done has been right. They are committed to help change the environment with their arena, have amazing jerseys, and have been killing it in the marketing game. I am so excited for when they begin play in 2021-2022. Until then, we have to wait and admire those jerseys from afar.