I am in a dynasty fantasy football league with my friends from high school. Currently we are in our fifth season and I am the proud owner of the league’s worst overall record, sitting at a comfy 21-47. The second worst team is at 23-45. I had my most successful season last year where I finished as the sixth seed in the regular season and ultimately finished third and got my money back. I have made many questionable decisions as team owner, and today we are going to analyze some of the worst ones.

It all starts with the start-up

To determine the draft order for our start up draft, we all got together and played mini golf. Which ever order you came in is the order in which you selected your draft spot. For example, the winner got to choose any one of the 10 slots available in the first round. I came in second and I chose to draft fourth. I had a strategy going into the draft that I felt was most likely to be successful drafting fourth.

Format here is important. It is a 10-team PPR (points per reception) super flex league. Our first year was Todd Gurley’s rookie season. Because of the superflex, the first two picks were Andrew Luck and Aaron Rodgers. When it finally gets to me, I make my first mistake. Sitting at four, I have every WR (except OBJ) available to me. That includes Julio Jones, AJ Green, DeAndre Hopkins, and Mike Evans. In my infinite wisdom, I selected Dez Bryant. Mistake number 1.

My second mistake was more unfortunate than anything. On start-up draft day, I traded Todd Gurley and Allen Robinson for Jamaal Charles, Eric Decker, and 1 first round pick. A week later, Charles tore everything possible in his knee and was never the same. 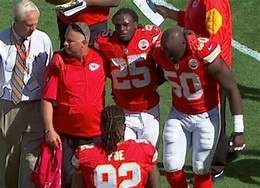 Naturally, my team was horrible the first season and I came in second to last. In my hours of draft preperation, the consensus was that Laquon Treadwell was the 2nd overall player. Naturally, he is now on his third team on his rookie contract and I dropped him years ago. The next year I selected Leonard Fournette with the  first overall pick and ended up trading the third overall pick (which could have been CMC or Dalvin Cook). However, I did take Alvin Kamara in the second round and that one has worked out well. Say what you want about Fournette, but when healthy, he was a very productive player for me.

Jury is still out

I have some very established stars in Julio Jones and Alvin Kamara. I have some very solid players in Tyler Lockett, Hunter Henry, Cam Newton, and Jared Goff. This past year’s rookie draft was huge for me as I had two top 5 picks that I used on Clyde Edwards-Helaire and Ceedee Lamb. All signs are pointing to these players being very successful, but as they are only 3 games into their rookie seasons, they still have time to develop. I also have some solid role players in DJ Chark and Robby Anderson in that I can usually count on double digit point performances at least every week.

Overall, I am very proud of the team I have built to this point. Some of the decisions, specifically the Dez Bryant and Laquon Treadwell decisions set me back years and years. However, with some smart drafting, and ultimately a lot of luck I have built myself into a contender this season. There is still plenty of room for improvement, but I definitely have the team on the right track. After a disastrous start as a dynasty general manager, I am thankful the owner saw me through the rebuild in order to put a winning team out on the field.