Breaking News: The New York Knicks are bad at basketball. Okay, maybe it is isn’t groundbreaking news. The Knicks have been a laughing stock in the NBA for most of the last 20 years. Essentially, the Knicks have had like 2 good seasons ever since Patrick Ewing left. The last made the playoffs in 2012-2013 when they finished as the 2-seed in the east and lost 4-2 in the second round to the Pacers. 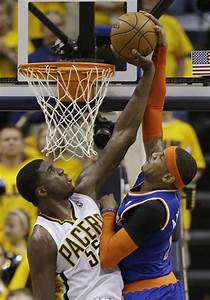 Not only have the Knicks been bad on the court, they have not had much luck in the lottery either. Their highest pick in the lottery was before this season when they drafted RJ Barrett with the third overall pick. Other notable lottery picks have been Frank Ntilikina (8th), Kevin Knox (9th), and Kristaps Porzingis (4th). The New York Rangers on the other hand (both teams are owned by James Dolan) just landed the first overall pick for the upcoming draft, and selected Kaapo Kakko with the second pick last season. The Knicks could certainly use some Rangers luck in the lottery tomorrow night. They desperately need a scoring guard (what Dennis Smith should be) and they can get one in either Anthony Edwards or Lamelo Ball at the top of the draft.

This year’s draft class is widely considered to be on the weaker side. There is no sure fire first pick like there has been the past few years. There are three players who could easily go number 1, depending on who wins the lottery. Anthony Edwards (Georgia), James Wiseman (Memphis), and Lamelo Ball could all hear their name called first on draft night. Ball and Edwards probably hold the highest upside out of the three. Ball may hold the advantage because he has been playing pro-ball over in Australia while Edwards and Wiseman both spent time playing in the NCAA.

They both possess the potential to be franchise players, but both have major flaws they need to correct. Wiseman on the other hand can be his own worst enemy at times. He is 7’1 and 240 pounds and can dominate around the basket. However, he has a tendency to drift away from the basket and not use his frame to his advantage. Wiseman certainly showed flashes of brilliance in his short stint at Memphis, but he needs to work on his instincts and perimeter game.

The draft class is weak compared to years past. However, it is always good to have the first overall pick. The Knicks can use it to draft Ball or Edwards, or dangle it in a trade to pick up future assets. The Knicks need help at pretty much every position on the floor. This may not be the draft to get the franchise player, but they can still get a very good one with a little bit of Rangers luck in the lottery.