The New York Giants just spent an entire offseason adding weapons to their offense to help third year quarterback, Daniel Jones. Daniel Jones was drafted 6th overall by the Giants a year after taking Saquon Barkley second overall. The Jones pick was criticized at the time and it is still criticized now. If Daniel Jones fails, that may set the franchise back countless years. The Giants finally seem to have direction under second year head coach, Joe Judge. They added weapons like Kenny Golladay and Kadarius Toney to an already high-potential offense. However, Jones needs to lead this offense to the next level. If Jones cannot take a big step forward this season, the Giants will most likely be looking for his replacement. Where do the Giants go at the position if Daniel Jones fails?

The easiest route to take would be through the draft. There is no sure fire prospect like Trevor Lawrence. There are also no prospects on the same tier as Zach Wilson, Trey Lance, and Justin Fields. However, there will always be quarterbacks available in the first round to teams that need them. Who are some of the top college arms?

Sam Howell has been one of the top quarterbacks in the nation. He started as a true freshman at UNC and has started every game since. Unlike other notable Tar Heel, Mitch Trubisky, Howell has much more playing time under his belt before entering his draft eligible season. Howell is your traditional pocket passer. He has a canon of an arm and comes back to college football as the number two rated QB (according to Pro Football Focus). He ranks as the top QB on passes that have at least 20 air yards. Howell has 2,654 yards on such passes. He is ranked as either the first or second QB on almost every draft board. Therefore, the Giants would have to greatly underperform or use draft capital to move up.

The red-shirt sophomore is campaigning to be the latest great Sooner quarterback. He had some huge shoes to fill following in the footsteps of Baker Mayfield and Kyler Murray. However, Rattler has lived up to the hype so far. Rattler possesses an NFL level arm who can fit the football into the tiniest of windows. In addition, he also has the ability to use his legs when necessary. Running is not his first option, but can move around the pocket and escape with ease. One area of improvement for Rattler is reading the whole field. He has a tendency to lock in on a receiver and lose his other options. 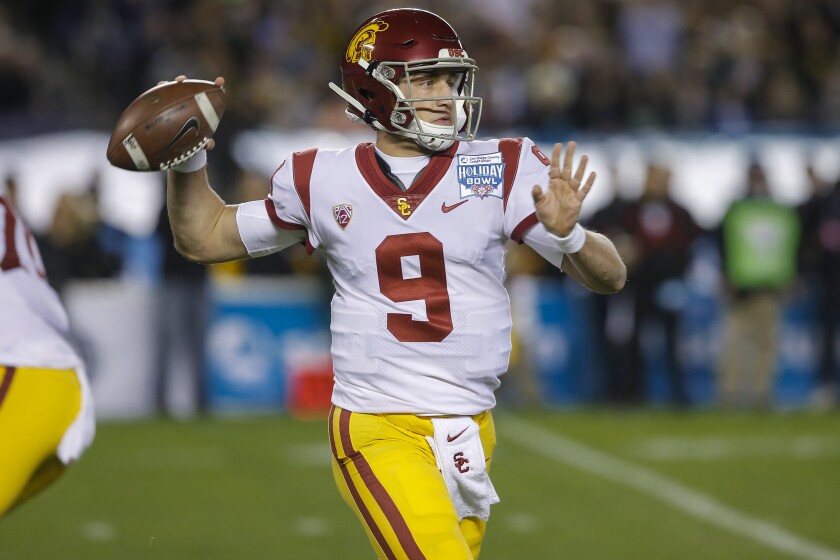 USC’s recent track record for sending QB’s to the NFL has been spotty at best. Sam Darnold was supposed to be the can’t miss prospect, but the Jets got in the way. You have to go all the way back to Carson Palmer to find a USC quarterback who had a truly successful NFL career. Kedon Slovis will look to right that ship. He started 11 games as a true freshman and all six games of USC’s shortened COVID season. Slovis throws the ball with accuracy, precision, and touch. He has average arm strength. His biggest weakness is his complete lack of a run game. He does not use his legs much, which means he may not fit well in today’s NFL.

I wrote a couple of months ago about how the Giants have the pieces to land disgruntled quarterback, Aaron Rodgers. The Giants have the draft capital to swing a trade for a disgruntled veteran quarterback. After trading with the Chicago Bears during the draft, the Giants now possess two first round picks in next year’s draft. Aaron Rodgers is known to be upset with the direction of the Packers and may force his way out of Green Bay.

The other player the Giants may look to is Russell Wilson. Wilson has voiced concern with what the Seahawks are up to. Dave Gettleman has done a nice job accumulating assets that he can use to snag a disgruntled quarterback. I do not believe the Giants will be able to pull off one of these trades, but they do have the draft capital to make it happen.

Daniel Jones’s Giants career may be over after this season. He has all of the pieces he needs to succeed. Kenny Golladay, Kadarius Toney, Evan Engram, Sterling Shepard, and a healthy Saquon Barkley should lead to a potent Giants offense. However, Jones has yet to take the step he needs to be a franchise QB. If only they could play the Washington Football Team every game as Jones has dominated them throughout his career. Daniel Jones is instrumental for the New York Giants success. However, the Giants need to have a plan at Quarterback in case Daniel Jones does not take his next step.