I was born in 1997. Two years after I was born, the Bills were in the playoffs and the Sabres were playing for the Stanley Cup. I didn’t watch sports then because I was still very young and didn’t remember the Bills and Sabres being good. Little did I know that was the last time the Bills would be in the playoffs for awhile and that was the last time the Sabres would be competing for the Stanley Cup. Ironically enough, both teams lost in heartbreak. For the Bills, it was a “lateral pass” during the dying seconds of their game and for the Sabres, it resulted in a foot being in a crease. If you’re a Buffalo sports fan, you know what I’m talking about.

Let’s fast forward to the year 2006. Just like present day, I had one good team growing up and it was the Sabres. The Bills were not a good franchise when I was growing up. In fact, they weren’t good until the year 2017. They won’t be mentioned for a bit but the Sabres were a different story. It’s weird that we think about the hockey team who hasn’t made the playoffs in 10 years as being one of the best teams back then but that’s what the Sabres were. They were a good hockey team in the early 2000’s and they provided fans, including me, memories that would last a lifetime.

Let’s start in the 2006 Stanley Cup playoffs, shall we? The Sabres were taking on the Philadelphia Flyers in the first round. Before I dive in, the Sabres were not expected to make the playoffs. They were bad and went through bankruptcy. In fact, there was a time where they could’ve left Buffalo. Owner Tom Golisano saved the Sabres and kept them in Buffalo. Let’s get back to the playoffs now. The Sabres finished 4th in the eastern conference while the Flyers finished 5th. Game 1 was the game where there was the most action. The game went into overtime tied 2-2. With just over 8 minutes remaining in the first overtime, Sabres defenseman Brian Campbell electrified HSBC Arena. You can see why in the video below.

In the second round, Buffalo was taking on the first place team in their conference, the Ottawa Senators. Just like the Flyers series, Game 1 was memorable. This game had everything but I don’t want to spoil it for you, watch it and see for yourself.

After winning the first two games in Ottawa, Buffalo was coming home and JP Dumont would score this goal to give Buffalo a stranglehold on the series. Just like Briere’s goal, this is another favorite of mine.

After losing Game 4, the Sabres had another chance to end the series. In overtime, the Sabres had to kill off a penalty. That’s when a rookie by the name of Jason Pominville etched his name in Sabres history. Take it away Rick Jeanneret!

This team was something special and they beat the top seed in the eastern conference and moved on in the postseason. In the third round, they would face the Carolina Hurricanes. With the Hurricanes leading the series 3-2, Buffalo needed to win at home to stay alive and they did just that. That’s when Briere would score another clutch overtime goal to send the series back to Carolina for Game 7. The Sabres would lose Game 7 but this goal will always stand out.

Being a Buffalo Sports Fan During 2007 Season and Playoffs 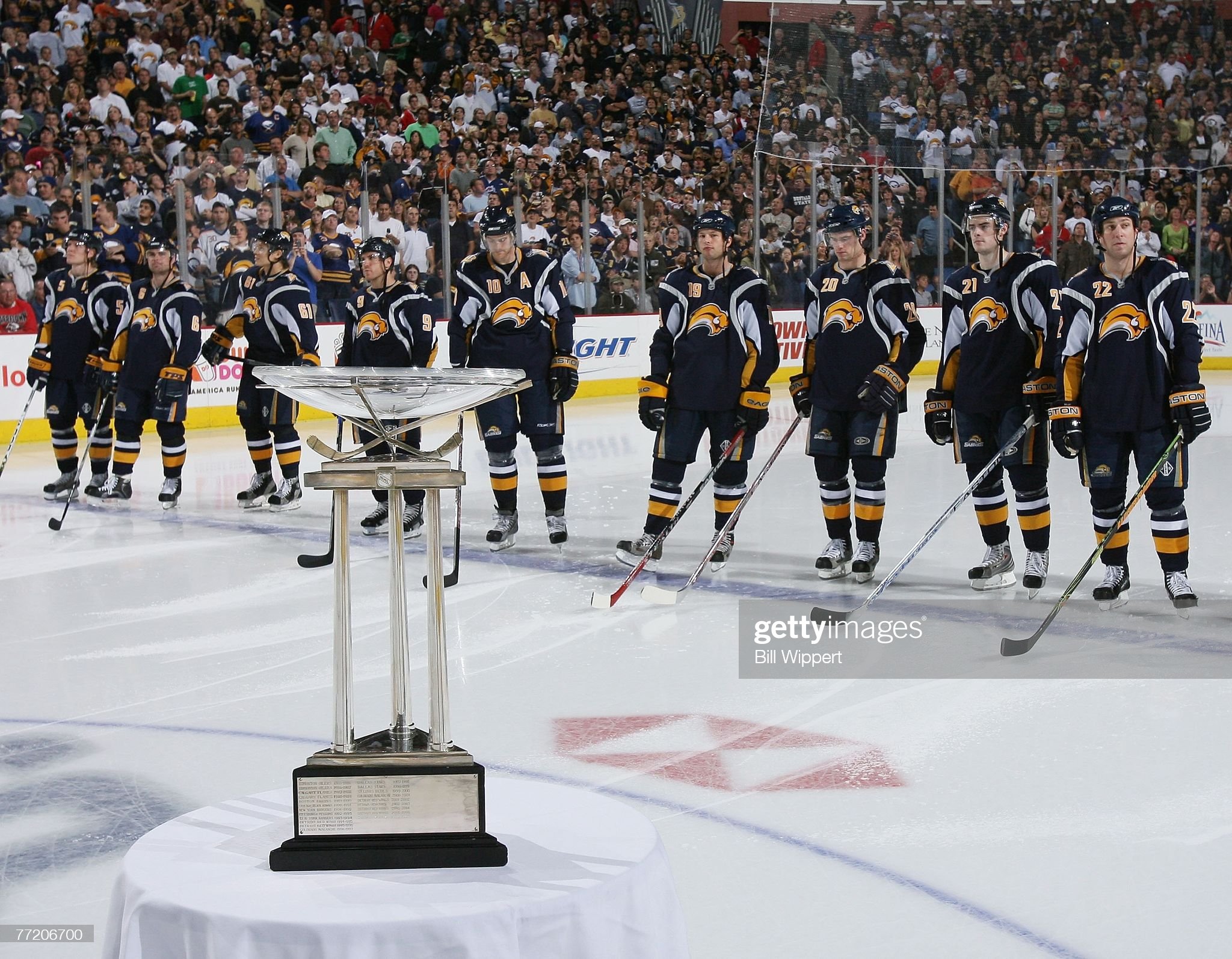 2007 was an amazing year for the Sabres. They won the President’s Trophy and gave us Sabres fans more memories. There were two moments that stood out to me during the season though. The first one was a regular season game against the Senators. In the second period, Sabres captain Chris Drury was a victim of a blindside hit from Chris Neil. Buffalo’s captain left the game and what happened next was pure chaos.

Speaking of Drury, he delivered one of the greatest moments in franchise history. After beating the New York Islanders in the first round, Buffalo took on the other New York team, the Rangers. With the series tied at 2 a piece, the Rangers had a late lead in Game 5 and were on the verge of taking the series lead. However, what happened next still gives me chills to this day and will always be my favorite Buffalo Sabres moment.

The Sabres would win the game thanks to Maxim Afinogenov, sending the series back to New York where Buffalo would win the series, advancing to the conference finals for the second straight season. Ironically enough, they would lose to the Senators in 5 games with the Sabres being the top seed and Ottawa was the 4th seed. But that series against the Rangers will always stay with me.

Taking the NHL Outside

If you played hockey, I’m sure at one point of your life you played it outside. That’s exactly what the NHL did in 2008 as they created the Winter Classic. It took place at Ralph Wilson Stadium, which is the home of the Buffalo Bills. The Sabres hosted the Pittsburgh Penguins and even though the Penguins won the game in a shootout, it’s nice to know I was there to experience it in person and it was a memorable experience.

Buffalo Sports Fan: We Are the Champions!

The last memory I had growing up was when the Buffalo Bandits, Buffalo’s lacrosse team, won the championship. I know a lot of people don’t consider lacrosse to be a popular sport like they do with hockey and football, but it’s a different story in Buffalo. In 2008, the Bandits were taking on the Portland Lumberjacks for the NLL title. The Bandits would win the championship, their 4th title in franchise history and I was fortunate enough to be there.

So here we are. The year is 2021 and I’m a young adult. Reflecting back on my childhood, it was full of memories that I’ll never forget. It’s funny because the Bills are legit and the Sabres are mess while the Bandits are still a good team. Even though I wish I would’ve experienced a championship with the Sabres, my memories growing up were pretty good when it comes to Buffalo sports. I hope things will get better as my life goes on.