Just like a stable quarterback, not having to worry about who is in between the pipes is gold to NHL franchises. The Rangers have been lucky over the past 30 years or so. Henrik Lundqvist has stood firm in goal for the last 15 years and the majority of the time before that, Mike Richter was in the blue paint. There was a few years in between those two where the Rangers had Mike Dunham and Dan Blackburn, but once Lundqvist made his debut, the Rangers never had to worry about their goalie situation. Currently, the Rangers find themselves in a unique situation. Right now, they have 3 goalies who they feel comfortable with playing. Lundqvist, Alex Georgiev, and Igor Sheshterkin have all shown signs of brilliance this season. But the question remains, who will start in game 1 against the Hurricanes? My vote goes to none other than Igor Sheshterkin. 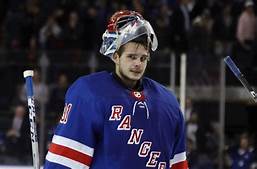 Drafted in the 4th round of the 2014 NHL Entry Draft, Sheshterkin made his NHL debut earlier this season. Before suiting up for the Rangers, Shesterkin was the best goalie in the KHL. He tended net for SKA, who is consistently one of the best teams in Russia. He put up monster numbers before signing his entry level contract this previous offseason. Once he became the starter for SKA St. Petersburg, he never won less than 20 games, and never had a goals against average (GAA) higher than 1.69. His last season in Russia, his GAA was 1.11.

He continued his dominance while playing for the Rangers AHL affiliate, the Hartford Wolfpack. In his 25 games in Hartford, he went 17-4-3, with a 1.90 GAA and a .934 save percentage. He made his NHL debut onJanuary 7 against the Avalanche. He has made 12 starts this season and posts a 10-2 record. Currently he sits at a 2.52 GAA and .932 save percentage. Based on his play this season, he has easily deserves the starting nod against Carolina. I had the pleasure of watching Prince Igor in person against the San Jose Sharks. Based on that performance, he is deserving of all the hype he got.

From King Henrik to Prince Igor

I have talked about Henrik Lundqvist countless times on my posts. He is one of my favorite athletes and it’s going to hurt like nothing else when he hangs up the skates. The fact the Rangers get to go from Henrik Lundqvist to Igor Sheshterkin with no gap is almost unfair. Obviously Igor is very young; he will still count as a rookie next season. Of course anything can happen, but if Igor can continue the way he played this season, he will be near the top of every Rangers goalie record by the time he is done. Enjoy King Henrik while he is still here, but find peace in knowing Prince Igor is the real deal.