So much has happened in Giants land since the first installment of Fixing Dave Gettleman’s Mess: Rebuilding the Giants Part 1. The Giants got embarrassed in their final games. Dave Gettleman “retired” while Steve Tisch put his foot down and the Giants fired Joe Judge.

In Part 1, we focused on the Giants need to find a franchise quarterback to catapult their rebuild. We discussed a variety of options for the Giants to pursue in order to find their next Eli Manning. This week, we are going to focus on one of the biggest weaknesses the Giants have, the offensive line.

Like I have mentioned many times in my writing, a lot of the Giants current problems stem from the 2018 draft. Gettleman tried to go for it one more time and drafted Saquon Barkley 2nd overall instead of rebuilding the Giants. With their second-round pick, the Giants selected LG, Will Hernandez to boost the offensive line. Hernandez is what Dave Gettleman called a hog molly. Hernandez was supposed to anchor the left side of the offensive line, but ultimately has failed to live up to those expectations. 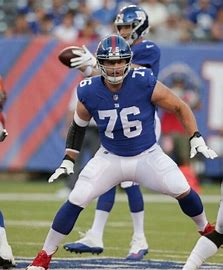 Gettleman also put his faith in an old and expensive Nate Solder. Prior to the 2018 season, the Giants signed Solder to a massive $62 million contract. Already into his thirties and declining, it was no surprise the Solder did not live up to his contract. Solder is one of Gettleman’s biggest misses as GM and has significantly hurt the Giants cap situation.

Now this one is kind of not like the others. Peart was a third round pick the same year the Giants selected Andrew Thomas. Peart was a high upside pick who had potential to be an NFL starter. To this point, he has not had much NFL success. Peart is an example of Gettleman having the right idea in swinging for the fences with an offensive lineman, but he just did not work out.

It is no secret that the Giants need to focus their rebuild on two main holes: the quarterback position and rebuilding the offensive line. Apart from Andrew Thomas, there really are no redeeming qualities of their o-line. There seems to be anywhere from 1-4 potential top 10 picks that are offensive linemen. The Giants are certainly in a position to land at least one of them.

The consensus top lineman in the draft is Evan Neal from Alabama. He is projected to be a top 3 pick, so we won’t spend any time on him. With that said, the Giants have picks 5 and 7 and are in a position to land at least one of Charles Cross, Tyler Lindbaum, or Ikem Ikwonu. Bleacher report currently has the Giants selecting both Ikwonu and Lindbaum with the fifth and seventh picks respectively, with Cross going to the Panthers at number 6. All three of them are impact players and are the exact type of players the Giants need to target.

As the draft gets closer, we will do a deep dive into each of those three prospects and any combination of the three of them would immediately make their offensive line better and be a great step in the Giants rebuild.

Like we discussed in Part 1, the Giants rebuild will not be complete overnight. However, they have made some big strides in the last two weeks with firing Joe Judge and wanting the new GM to have full autonomy in decision making. It seems like the Maras are finally getting what fans have been saying for years. To Dave Gettleman’s credit, he did believe that games can be won in the trenches, he just did not make the right moves in building the Giants offensive line. There is a plethora of top linemen in this draft the Giants can target. With Andrew Thomas looking like a true superstar in the making at LT, nabbing a few of the top interior offensive linemen this year will have the rebuilding Giants off and running in the trenches.