Week 18 football is underway! On Saturday 1/8/22 the Dallas Cowboys beat the Eagles 51-26. Which means for the Dallas Cowboys next up is some NFL playoff football. Currently the Cowboys sit in the #4 seed and won the NFC East Division, this is where they will likely stay but let’s look at the possibilities of who they could matchup with for wildcard weekend. Here are my thoughts on the Dallas Cowboys wildcard matchup potentials.

In week 16 we saw the Dallas Cowboys face off against the Arizona Cardinals, and unfortunately the Cowboys fell short. The game ended up being close a 25-22 Cowboys loss. Currently, this is the most likely scenario for the Cowboys. The Dallas Cowboys are #4 and then Arizona Cardinals are #5. The upside the Cowboys have already played this team this season, there may be some familiarity in the matchup. The downside the Cowboys defense who many have been surprised with had one of their worst games that week. Can they be hot in the playoffs? Both teams have offensive weapons that can come to play at any given time. This matchup is an iffy can go either way on who comes out the winner in Wildcard weekend. Personally I would not mind a little revenge on the Cardinals.

Currently the NFC West crown is still up for grabs, the Rams are sitting in that #2 seed but there is a scenario where they drop down to that #5 seed. Obviously if they win against the 49ers they stay there and will not be the Cowboys matchup. Say the Rams lose though? If the Cardinals and Buccaneers both win then the Rams will move to that #5 seed. Although Matthew Stafford’s performance has been trending down in the last couple weeks they have the weapons and the coaching ability to make a deep run.

Upside the Dallas Cowboys would still hold homefield advantage but, no matter the matchup this is the case. Downside history could repeat itself last time the Dallas Cowboys were in the playoffs they lost to the LA Rams in the division round. So there is a possibility they could be the Cowboys wildcard matchup, and personally the team I least want to see there. 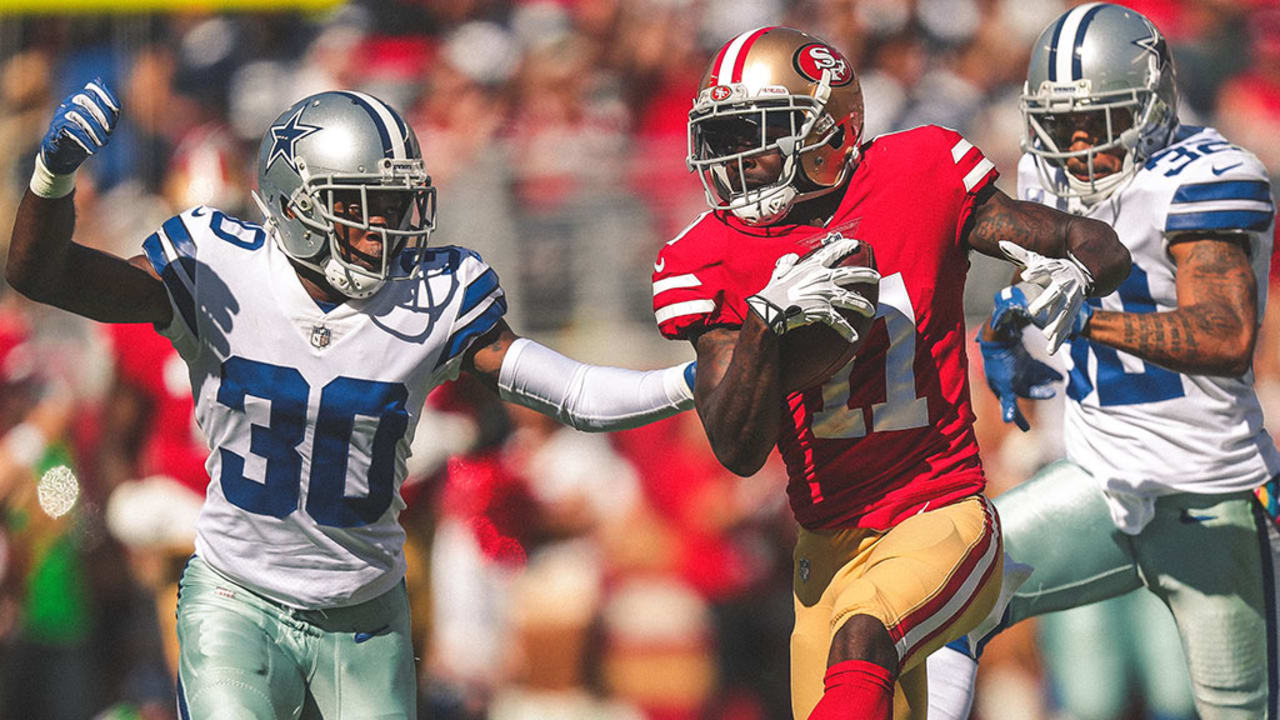 This one is probably the least likely scenario. The 49ers are still fighting for their spot in the playoffs. 49ers win they stay in. They lose and Saints lose they stay in. A loss and Saints win the Saints sneak into the playoffs. Now how could this be the Cowboys wildcard matchup? If the 49ers, Buccaneers and Seahawks win then the Cowboys move up a seed to #3. This would lead to a #3 and #6 matchup between these two teams. My personal opinion I do not hate this matchup. When comparing teams I give the upside to the Cowboys. The 49ers do have weapons such as Samuel and Kittle, but when it comes to defense the Cowboys are superior. You ever hear the saying defense wins championships. In this case it would be defense wins wildcard matchup.

After the week 18 matchup it is still possible to play the Eagles yet again. Here is the scenario that gets the Cowboys to that matchup again. The 49ers, Panthers and Seahawks win would get the Cowboys to the #2 seed. This would be a #2 vs #7 wildcard matchup. I have heard many many Dallas Cowboys fans say we want the Eagles again. I on the other hand am the opposite route. The reason why the Cowboys have already beat the Eagles twice, how likely is it to beat a time 3 times in one season?

If I know anything about the NFC East it is these teams can play close games and often times they split the season matchups 1-1, the fact that the Cowboys swept the Eagles makes me weary of another matchup. Plus as a Cowboys fan you would not hear the end of it if the Eagles beat this team in the playoffs. This scenario is quite unlikely to happen and the one I want least to happen for a wildcard potential matchup.

Those who know me know how HUGE a Dallas Cowboys fan I am. I have been saying since the start of the season I just want at least one playoff win from this team. They have potential to make it further but this is a game by game scenario. The wildcard matchup potential game looks to be a NFC East vs NFC West game. I am excited, nervous but ready to cheer this team on in the postseason. After all… WE DEM BOYZ!