It was a fantastic year for the Buffalo Bills. The team went 13-3, won the AFC East and went to the AFC championship game. This week, I will be doing a couple of articles on both the regular season and the postseason. In this article, I will give a brief breakdown on each game during the regular season.

First up on the schedule, the New York Jets. Not only was it the first game of the season but it also gave Bills fans their first look at newly acquired wide receiver Stefon Diggs. At one point, Buffalo was up 21-0 and the Bills would’ve had more points but rookie kicker Tyler Bass missed a couple of field goals. The Jets were expected to have a rough season and even though the score was close at the end of the game, the Bills got the victory to go 1-0 on the season.

From one AFC East opponent to another, Buffalo would head down to South Florida for a battle against the Miami Dolphins. Bills quarterback Josh Allen never threw for 300 yards going into this game, that would change in this meeting. Not only did Allen throw over 300 yards, but Diggs got his first touchdown as a Bill which couldn’t be seen because of a power outage. Late in the game, Miami was closing the gap when Allen showed off his arm and threw a great touchdown pass to wide receiver John Brown. The Dolphins would score a late touchdown but Buffalo held on for the victory. In the victory, Allen threw for over 400 yards.

Buffalo would go 3-0 after this game but it wasn’t easy. At one point, the Bills were dominating the Rams 28-3. However, in the second half, Los Angeles took over. The Rams would take the lead late in the fourth quarter, but Allen had a chance to take the lead back again for Buffalo. Deep into Rams territory, the Bills had hope thanks to a questionable pass interference call on the Rams. Right after the call, the Bills would score, giving them the win in what was a wild game.

After the thrilling victory over the Rams, Buffalo would head out to Las Vegas for a meeting against the Raiders. Buffalo’s defense came to play as they would force a couple of turnovers, including Josh Norman, who was making his Bills debut, forcing a fumble. However, Bills fans would get a scare when Allen got hurt after throwing a pass to Diggs. It would be a brief scare as Allen would come back. Speaking of Allen to Diggs, they would connect on this fantastic play. Buffalo would win the game and would move to 4-0.

The next two weeks would be the roughest stretch for the team, starting off in a blowout loss against the Tennessee Titans. This game was surrounded by Covid-19 when the Titans had an outbreak, rescheduling the game. Well it didn’t go well for the Bills, and it certainly didn’t go well for Norman as Titans running back Derrick Henry would stiff arm him, sending Norman down on the field. There was one good thing for the Bills and it was Allen’s arm. Shoutout to his offensive line, this was an impressive pass to T.J. Yeldon.

This game wasn’t a blowout but the Bills looked bad once again. It was a cold and rainy day in Orchard Park for this game. The defending Super Bowl champions would be coming to town and the Bills were looking to rebound after that beatdown against Tennessee. Despite the final score being a nine point gap, Kansas City shredded the Bills defense and Allen did not look good. He had some good moments, but it wasn’t a pretty outing for Buffalo and they would lose their second game in a row.

After two losses in a row, Buffalo was desperate for a win and they did not want to lose three games in a row against a winless team. The Bills would head to East Rutherford to take on the Jets to complete the season series. In the first half, it wasn’t looking good for the Bills. New York would take a 10-0 lead and Buffalo was struggling to score on offense. Luckily, their rookie kicker was the reason why they got 18 points. Tyler Bass kicked six field goals and the defense played much better in the second half. There was a lot of concern about the offense, but as for the defense, the tide was starting to turn. Buffalo would break the two game losing streak and would sweep the Jets.

Up next, Buffalo’s kryptonite. Let’s face it, when the Bills face the Patriots, it would be a sweep for New England. However, this year would be different. With no Tom Brady and the Patriots struggling, this was the year for the Bills to defeat the team that has dominated them for the last two decades. Allen would get his first victory against the Patriots and a hero was named. A couple of weeks before the game, the Bills signed defensive tackle Justin Zimmer to the active roster. Little did we know he would become a Buffalo sports hero. The Bills had a three point lead late in the fourth quarter but the Patriots were on the verge of either sending the game into overtime or winning the game. New England quarterback Cam Newton was scrambling when Zimmer punched the ball out, forcing a turnover and giving Buffalo the victory.

Buffalo enjoyed the victory against New England but would have to prepare for the Seattle Seahawks. Allen played one of the best games in his career, as he would throw for over 400 yards and the Bills defense balled out against a good Seahawks offense. It was after the game when everyone found out that Allen was playing with a heavy heart as his grandmother sadly passed away the night before. It’s not easy losing a loved one but Allen played his heart out and defeated one of the best teams in the NFC.

After the victory over the Seahawks, the Bills would take on another NFC West opponent, the Arizona Cardinals. Buffalo would be up by two scores at one point, but Arizona battled their way back and took the lead. In the final minute of the game, the Bills would have one more chance to strike. They did just that as Allen would connect with Diggs to take the lead with just over 30 seconds to go. Unfortunately, that touchdown was overlooked by a successful Hail Mary, giving Arizona the victory and leaving all of Buffalo in shock. 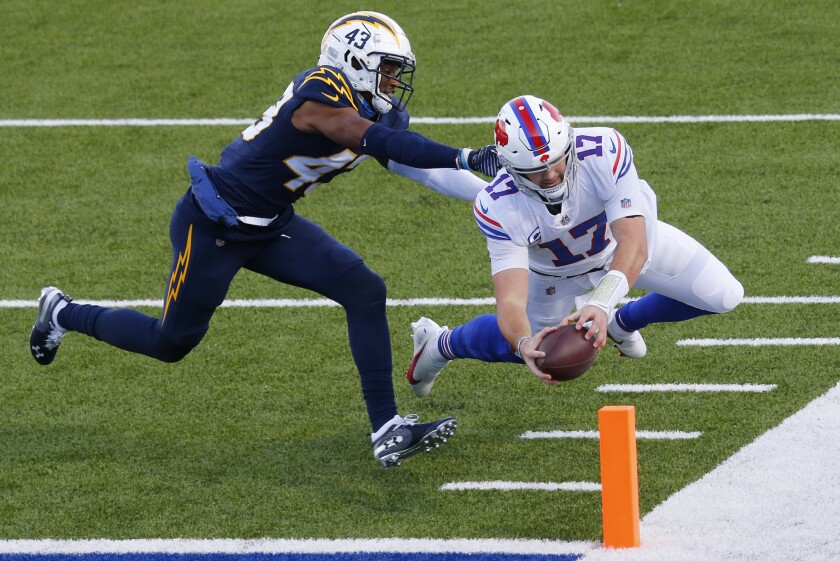 Not only was it a heartbreaking loss to Arizona, but Buffalo had to wait two weeks to rebound with the bye week next up. After the bye week, it was back to work as the Bills would host the Los Angeles Chargers. Offensive rookie of the year Justin Herbert struggled in the first half against Buffalo but the Bills defense did a solid job despite giving up another Hail Mary but this time, it wasn’t a touchdown. This game would also feature a trick play for a touchdown thanks to wide receiver Cole Beasley. Buffalo would indeed rebound, improving to 8-3 on the season.

Buffalo would get their first primetime game as they traveled back to Arizona for a battle against the 49ers. The 49ers were forced to find a new home after Santa Clara banned all sports because of Covid-19. The last time Buffalo played an NFC West team in Arizona, it ended in heartbreak. It was a different story this time around as Buffalo would defeat a tough 49ers team. Allen was very good and showed the world how good he was. To check out Allen’s performance, check out the highlights below.

After defeating the 49ers, the Bills would come home to host the Pittsburgh Steelers. In the first half, both teams were struggling but the Steelers scored the first touchdown of the game. They had the lead for just about the entire first half but with less than a minute to go in the second quarter, the turning point of the game occurred. Bills cornerback Taron Johnson picked off Steelers quarterback Ben Roethlisberger, taking it to the endzone for a pick six, giving Buffalo the lead. The Bills would not give up the lead at all and would win the game.

With the victory over the Steelers, Buffalo had a chance to do something they haven’t done in 25 years, win the AFC East. All they had to do was to beat the Denver Broncos. Spoiler alert, they didn’t just beat the Broncos, they blew them out. The offense was a powerhouse once again, but the defense contributed as well. Check out this crazy fumble recovery for a touchdown. Buffalo would go 11-3 with the victory.

After clinching the division, Buffalo had a chance to sweep the Patriots for the first time in a long time. Once again, Diggs was a factor and he had a monster game. The Bills only gave up one touchdown and Allen dominated the team that has been a thorn in his side during his young career. Buffalo would get their 12th win of the season in the victory over the Patriots.

To conclude the 2020 regular season, the Bills had a chance to sweep the entire the AFC East and clinch the number two seed in the AFC if they could defeat the Miami Dolphins. A lot of people thought the team were going to bench some of the star players to make sure they were healthy going into the postseason. However, as I mentioned, there was something to play for with the number two seed up for grabs. To make a long story short, they didn’t bench their starters until the second half and Buffalo blew out the Dolphins. The Bills got a punt return for a touchdown and Allen dropped a dime to John Brown which you can see below. Clinching the number two seed in the AFC and sweeping the AFC East, Buffalo would finish the 2020 regular season with a blowout victory.

What a year it was for this franchise and the fanbase. It was a roller coaster of a season. From starting to 4-0, to losing two bad games in a row, winning a few games, losing on a Hail Mary and winning the rest of their games. Even though that Arizona game was heartbreaking, I truly believe that was the turning point of the season and it made the team better. Make sure to watch out for my next article but this time, it will be about the postseason.