Let’s be real, it looks like the Buffalo Sabres will not be in the playoffs for a tenth straight season. It’s hard to believe that a team who has Jack Eichel, Jeff Skinner, Taylor Hall, Rasmus Dahlin and more talented players is sitting in last place in the NHL. It’s mind boggling that a team with that much talent isn’t anywhere close to a playoff spot. The Sabres are 6-10-3 with a total of 15 points. As I mentioned before, they sit in last place in the league and also in their division. One of the problems I believe is the head coach, Ralph Krueger.

Buffalo is currently on a three game losing streak and in the midst of a 56 game season, every game is crucial and if the fans have any hope at all the team will break the drought, it’s very little hope. It doesn’t fall all on Krueger but he does deserve a majority of the blame. The biggest thing that makes me aggravated are his lines. The obvious example is Jeff Skinner. For whatever reason, Krueger continues to play Skinner in the bottom six. He also benched him for three games, which sent outrage throughout the fanbase. It really bugs me because he gives guys who are not better than Skinner more chances on the top two lines. No disrespect to those players but Skinner is making nine million and if you’re paying a player that much money, he should not be in that situation. 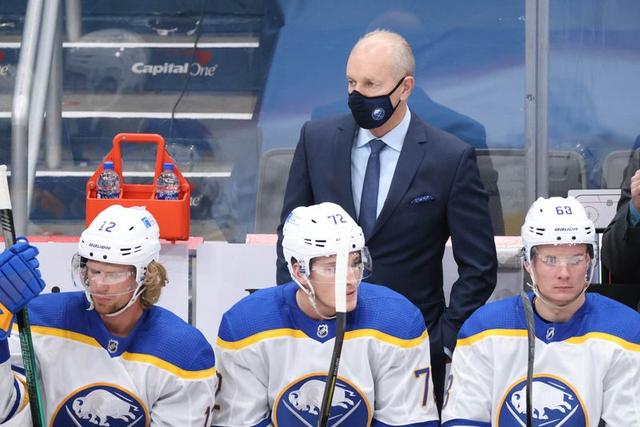 Now the fanbase has another reason to hate on Krueger. After their most recent loss to the Philadelphia Flyers, it sounds like Ralph lied. Before taking on the Flyers, Jack Eichel suffered an injury in New Jersey. Before the first game against Philly, Krueger announced Eichel would miss the game because of an injury. After the game was over, Ralph said it was a new injury that he suffered in warmups. Fast forward after the second game and Eichel dropped a bombshell. In his postgame interview, Eichel said he was out against the Flyers because of the injury he suffered in New Jersey.

After that comment, social media went crazy. The fact that you had the player himself say it was a different answer than the coach is not good at all. People don’t know who to believe but when the answer is coming from the player who had the injury, then I think all of the credibility goes to the player. Is there something going on in the Sabres locker room? We don’t know. Will we ever know? probably not. The Sabres are back at it tonight against the New York Rangers @7pm.