Alvin Kamara has been one of the most productive backs in the NFL since he made his debut in 2017. Also, he has been the standout player for Alvin and the Shipmunks (my dynasty team). He beat out Adrian Peterson for the second back on the depth chart behind Mark Ingram and then took over the lead spot when Ingram left for the Ravens in free agency. Currently, Kamara has been absent from Saints camp for the past three days. Speculation is that it is contract related. Kamara is entering his fourth season and the last before his rookie contract is up. Joe Mixon just signed a new extension today and Christian McCaffrey signed a new deal earlier this offseason. Today, the news came out that the Saints are open to trading their star back. 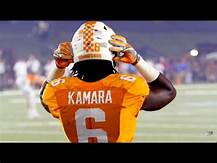 Kamara was drafted in the third round out of Tennessee. He opened as the Saints third string running back behind both Mark Ingram and Adrian Peterson. The Saints ultimately moved on from Peterson early in the season and Kamara moved into a bigger role. Both 2017 and 2019 were decent seasons, but 2018 is by far his best season. Kamara exploded for 14 touchdowns on the ground and 4 more in the air. He also accumulated 883 rushing yards and 709 receiving yards. Kamara is also the Khris Davis of the NFL, he has 81 receptions exactly all three years in the NFL. McCaffrey was the first player in NFL history to surpass 1,000 rushing and 1,000 receiving yards in the same season. Kamara is one of the few others who could accomplish that feat.

If the Saints trade Kamara, it would certainly be a playoff team who needs help at running back. Speaking as a Giants fan (so no New England bias), the first team I thought of was the New England Patriots. I feel Kamara and Newtown could do a ton of damage running the RPO. The Patriots need running back help and Kamara would fill both the rushing and receiving need in New England’s backfield. The Saints and Patriots do have a history of being trade partners when the Saints sent Brandon Cooks to New England.

Another potential target I see could be the Buccaneers. I understand that this would be trading within division and no team likes to do that, but imagine the Bucs offense with Brady, Kamara, Evans, Godwin, and Gronk. The one position the Bucs lack in is running back with Ronald Jones and Ke’Shawn Vaughn.

Let me be clear here; Kamara and his agent have not asked for a trade, but that does not mean the Saints will not explore options. Honestly, I have no idea why the Saints would even think about trading Kamara. He is one of the best backs in the league, and he doesn’t have the wear and tear that some backs do. He spends most of his time in the open field so he does not get hit as much as the in between the tackles runners. If the Saints want to win, Alvin Kamara must be on the field. The Saints are not as good of a team with Latavius Murray in the backfield. Kamara is in the same conversation as Barkley and Elliot and he should be paid as such.