Another position that the Patriots decided to neglect this offseason to this point is wide receiver. The position was already depleated last season, and they did not address it then, and they still haven’t done anything to improve the position. There is not much young talent on the roster, not much height, and not much experience after the first 2 receivers.

Julian Edelman – Edelman is about all the skill and experience this team has. Even when teams try to take him out of games he always finds a way to get open. The offense is going to rely so heavily on him going into the season to make this offense run, and he is going to get double teamed like crazy. They have to find someone to fill in and make the offense move so they don’t run Jules into the ground.

Phillip Dorsett – The next most tenured receiver on the roster, with a year and a half of experience with the Pats, Dorsett had flashes of talent throughout the season. He has always reminded me a bit of Deion Branch, as a smaller, fast receiver who is a great route runner. He is going to need to be that guy that steps up big time and makes this offense move. They can’t just rely on Jules and James White all the time. If Dorsett can have a season similar to what Brandon Lloyd or Brandon LaFell were for this team in the past then this offense will do just fine. 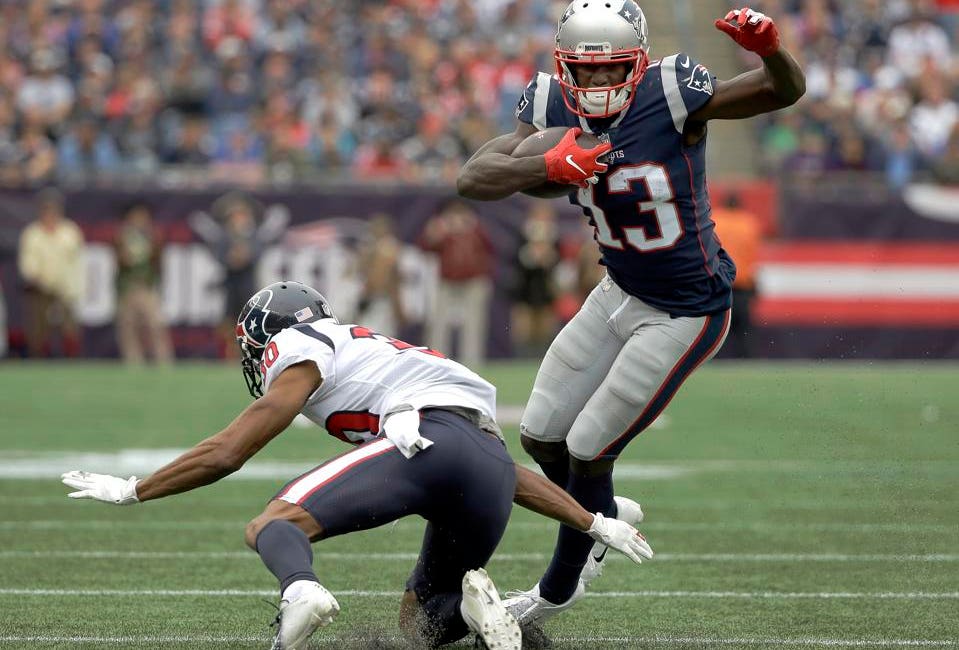 Braxton Berrios – Yeah, he is the next guy in line. He spent all of his rookie season on IR last year and never got a chance to prove himself. There is no doubt that he fits the mold of the perfect Patriots receiver, but it is yet to be seen if he has the talent to help Brady make the offense work. He should be great in the short passing game with his small and quick frame, and maybe he is a little faster than Jules and has the ability to break a big play or two.

Bruce Ellington – Yeah another receiver under 6 feet tall. Who knows why they brought him in, he has been hampered with injuries his whole career and even had to have a part of his hamstring removed. He has some kick return ability and at best compares to Keshawn Martin of the past. Maybe he fits in as a 4th or 5th guy but I would be surprised if he really makes the roster.

Maurice Harris – Harris is a very unproven talent that seems to have huge upside. He blew up for about 2 games for the Redskins until he fell to the back of their receiver pack. He actually has some height and has the ability. If Dorsett is unable to make it as the number two receiver this is the under the radar guy to take that spot. I am excited for this underdog free agent pickup to find a way to make an impact.

Damoun Patterson – Patterson has never actually played in an NFL game yet. He was on the Patriots practice squad last season and that is about all we know about him. We have had some surprises in the past like David Givens, so with him all we can do is let time run its course.

Matthew Slater – I won’t even humor this idea. He has one catch over his whole career. Keep special teaming, Matt.

Free Agency – Same as the tight end position that they neglected, there is not much left available for wide receivers. The cheap and easy way out would be to sign Chris Hogan back for another unproductive season. Aside from that there are a few washed up vets that probably want way too much money, like Crabtree, Garcon, Dez Bryant etc. It seems like those type of receivers never buy in to the offense. The only somewhat young and possible good fit left might be Rishard Matthews, who had a very down season last year but has been a solid receiver in the past. Maybe they take a shot on him, but otherwise it’s not worth signing any other free agents.

Draft – There are a lot of talented receivers in this draft. Most of the best will go way too early, like D.K. Metcalf, A.J. Brown, and Marquise Brown. But some guys could slip through like Deebo Samuel, who was great last year, but did not blow people away at the combine so they have sort of forgot about him. Riley Ridley, who is Calvin’s brother and possesses the same skill set, one the Pats would have loved to have drafted last season. J.J. Arcega-Whiteside who is the red zone threat this team seriously lacks. And maybe Andy Isabella, a Umass kid that seems to be a perfect fit for the system and has some serious wheels. They have to draft someone at the wide receiver position, especially with all of the extra compensatory picks they have. It is never easy figuring out who it will be.