We are only 2 days away from the first football game of the new season and only 6 days away from the first Giants game. After a disappointing 4-12 season, the Giants will take the field Monday night against the Steelers. The Steelers should be a much better team this year (assuming Big Ben stays healthy). Let’s take a look at some of the storylines heading into week 1 for Big Blue.

Daniel Jones and his butter fingers 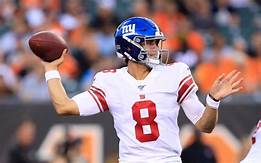 Nicely put, Daniel Jones needs to hang on to the football better this season. Jones showed signs of brilliance in his rookie season, but he needs to not fumble as much if he wants to take a step forward. Jones fumbled the football 18 times last season. Pair that with his 12 interceptions and Jones was near the top of list for turnovers. They have invested in the offensive line so that should help (also with Nate Solder opting out, they won’t have a revolving door at LT). Next to Kyler Murray, Jones was the best rookie QB last season and will look to take a huge step forward in year 2.

The Giants defense is, well, bad. Other than Marcus Golden, they have no established pass rusher. But good news though, they traded for Leonard Williams when they already have Dalvin Tomlinson and Dexter Lawrence to plug up the middle of the DL.

The Giants made strides to improve their pass defense when they took DeAndre Baker in the first round last season and traded for Jabrill Peppers. However, Baker looked lost at points and is now looking at 5-10 behind bars. Peppers is blossoming into a star and rookie safety, Xavier McKinney should be an impact player. The Giants also took CB, Darnay Holmes out of UCLA in this year’s draft. Holmes has been flooding the Giant social media pages with highlight plays. The Giants have done a nice job of adding to all aspects of their defense except the pass rush, so expect Big Ben to be able to throw all night on Monday.

If the Giants want to have any chance of success this season, the offense needs to stay healthy/not get suspended. Evan Engram, Golden Tate, and Saquon Barkley all missed significant time last season. If they can stay healthy, along with Darius Slayton and Sterling Shepard, this offense can be something special. The Giants will be in a lot of shootouts because of their poor defense so hopefully the offense can keep pace.

The clock is ticking on Dave Gettleman as GM. The Giants need to make major improvements this season if Gettleman wants to keep his job. They invested in the pieces to be successful in the next couple seasons so hopefully things start clicking for Big Blue. I think we could be looking at another 4-12 season and at best a 7-9. Even though thats the case, I am super excited for football season. I don’t have high expectations for the Giants so I can sit back and stress out over my fantasy team.