A football fan has filed a lawsuit alleging the New York Giants and the New York Jets have caused monetary loss and emotional damage to “millions” of fans by playing in New Jersey. Is it time for the Garden State and the Concrete Jungle to finally stop living a lie? 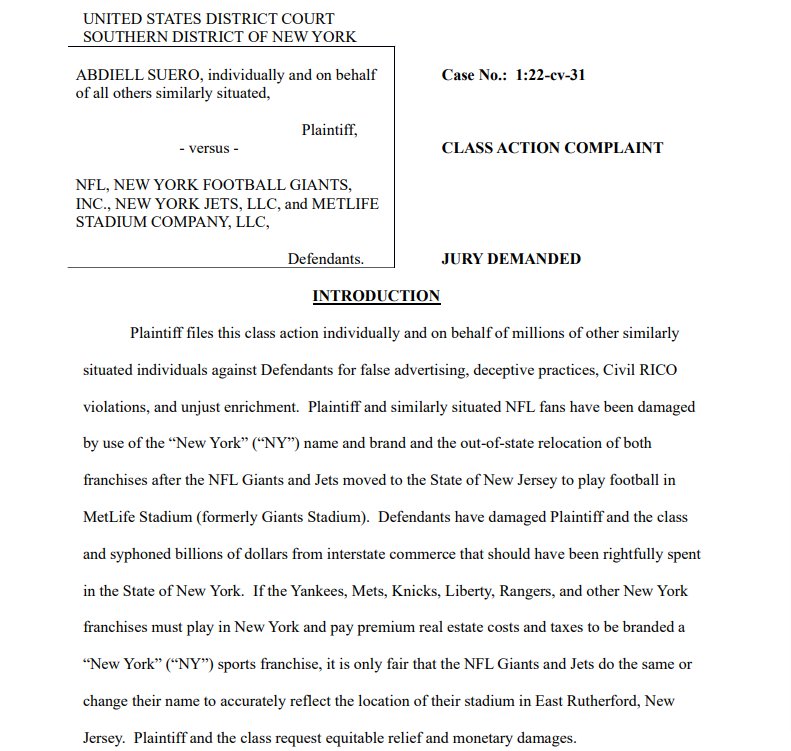 On January 3, 2022, Abdiell Suero filed a class action lawsuit in a New York federal court naming the NFL, the New York Giants, the New York Jets, and MetLife Stadium as defendants. Suero’s claims include false advertising, deceptive practices, Civil RICO violations, and unjust enrichment. These claims stems from the teams playing in New Jersey, rather than New York as their name suggests. Suero is requesting $6 billion in damages and that the court order both teams to move to New York.

Let’s break this lawsuit down.

The Struggles of a New York Football Fan

Suero’s first 2 causes of action allege that the defendants engage in false advertising and deceptive practices. Pursuant to the complaint, the use of the names “New York Jets” and “New York Giants” on merchandise, tickets, and other related items misleads fans into thinking their favorite team plays in New York.

Suero also claims that MetLife Stadium’s website falsely advertises the stadium as better than it actually is. MetLife’s website labels itself as “the number one stadium in the world.”

According to Suero there are 27 other stadiums across the globe that are larger, provide a better viewing environment for fans via retractable domes, and have better stadium transportation. The complaint adds, “MetLife Stadium is clearly not the ‘number one stadium in the world.'”

The third claim alleges the League, both teams, and the stadium violate the Racketeer Influenced and Corrupt Organizations Act. RICO was passed in 1970 and was intended to target organized crime, specifically mobsters. Today the Act is used to penalize crimes such as money laundering, kidnapping, and murder.

Here, the violations arise out of claims of wire fraud. The complaint alleges that the defendants intentionally mislead fans to think the Giants and the Jets play in New York. The defendants do so to increase the value of their franchises and profit off of New York’s notoriety. This misrepresentation has “turned a $500 investment into a $9 billion fraudulent enterprise,” according to Suero.

The final cause of action in the complaint is unjust enrichment. Unjust enrichment refers to when one party confers a benefit upon another without compensation, rendering the balance of benefits unjust. Suero claims that the defendants have been unjustly enriched at the expense of fans through the price of tickets, concessions, and traveling.

Plaintiffs must show that they were harmed in some way, whether it be physical or monetary, to prevail in civil actions. Suero claims that he and other fans have suffered economically by having to travel from New York to New Jersey to attend games. The complaint lays out distances fans have to travel, as well as the price of tolls and Ubers. Suero concludes by blaming low home game attendance on the fraud, rather than the performance of his favorite teams (both of which went 4-13 this season):

The inconvenient out-of-state location of MetLife Stadium is further reflected by the fact that the percentage of empty seats at Giants and Jets games makes them among the least attended home games in the NFL… For example, this season (2021) NFL teams with 99% or better attendance at home games include teams located in densely populated cities including…. However, this season the Jets are ranked #5…and the Giants are ranked #7 out of 32 with the most-empty seats per home game… Despite being named after the most densely populated city in the United States…the Giants and Jets are in the top 40% of teams every year with the most-empty seats in home games…

Additionally, Suero claims fans suffer emotional and psychological damages as a result of having to attend games in New Jersey. He asserts that fans build relationships with teams and develop a sense of belonging. However, the relocation of both franchises to New Jersey has caused those bonds to weaken. New York football fans are “bullied by NFL fans” because of their teams’ ties to New York. The “bullying” has lead Jets and Giants fans to suffer from depression, sadness, anxiety, and damaged self-esteem.

Suero has requested 3 different remedies in his lawsuit against the NFL. First, is an order requiring both teams move their stadium to New York once their MetLife residencies expire in 2025.

Finally, Suero is seeking a $6 billion judgement. That includes $2 billion for monetary compensation and $4 billion in punitive damages (used to “punish” defendants for wrongful behavior).

None of the 4 defendants have filed a response to the lawsuit yet. However, you can expect the NFL, both teams, and the stadium to file numerous motions to dismiss in this case. The merits of this case seem to be lacking. The real issues here are Suero’s denial of the poor quality of his favorite teams, and that a practicing attorney actually filed this lawsuit.