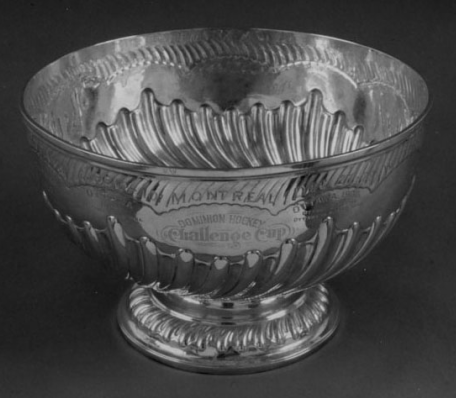 The Stanley Cup is the oldest trophy in North American sports, predating the NHL itself. It was first commissioned in 1892 as the Dominion Hockey Challenge Cup. Lord Stanley of Preston donated the cup as an award to Canada’s top amateur ice hockey team in 1893. In addition, only amateur teams were allowed to compete for the Stanley Cup from 1893-1905. Professional teams first competed for the trophy in 1906. Starting in 1915, the National Hockey Association and the Pacific Coast Hockey Association, the two highest level professional leagues at the time, reached an agreement to have their champions play each other for the Stanley Cup. NHL teams did not start competing for the Stanley Cup until 1926. The Stanley Cup became the unofficial trophy of the NHL in 1926 and became the official trophy in 1947.

Unlike other sports, there are only 3 Stanley Cups. There is the original bowl of the Dominion Hockey Challenge Cup, the Presentation Cup, and the Permanent Cup that is on display at the Hockey Hall of Fame. Therefore, teams do not get to keep the Cups that they win. A new Stanley Cup is not made every year like the other North American championship trophies. The three Stanley Cups only adds to the legend and significance that the Stanley Cup holds.

There are so many traditions that come with winning the Stanley Cup. Perhaps the most famous one is the winning team’s captain receiving the Cup from the commissioner and raising it over his head. However, that was not always the case. This did not become a regular practice until 1950 when Detroit Red Wings captain, Ted Lindsay, started the customary celebration.

Like I said, the captain is usually the first one to lift the Cup above his head and take a lap around the ice. However, there are always exceptions. Enter Raymond Bourque. Bourque spent the first 21 seasons of his NHL career with the Boston Bruins and never won the Cup. However, in his final NHL season with the Colorado Avalanche, he finally won hockey’s greatest prize. Avalanche captain Joe Sakic received the Cup and immediately handed it to Ray Bourque who lifted it above his head with tears streaming down his face. Bourque was one of the most accomplished individual players in hockey history. However, nothing compared to finally lifting Lord Stanley’s Cup above his head.

The winning team is allotted 100 days with the Stanley Cup. Usually, players will bring it to their hometown back in Europe, or to the rink that they first started playing hockey in. Ray Bourque brought his Cup back to Boston to celebrate with the fans who cheered him on for 21 seasons. However, not every story is as sentimental as that one. The Cup used to go on tour “unsupervised” from the Hall of Fame until after 1994. Legend has it that Eddie Olczyk of the New York Rangers had the 1994 Kentucky Derby champion eat out of it. From the point forward, the Cup was always accompanied by a representative of the Hockey Hall of Fame.

Every member of the winning team has their name engraved forever on the Stanley Cup. One of Lord Stanley’s conditions was that the winning team (at their own expense of course) could engrave their team name and the year they won on the trophy. As more and more teams did this, they eventually ran out of room. New bands were added to the bottom of the trophy so more teams could commemorate their victory. It was not until 1924 when it became an unbroken tradition for the winning team to engrave the name of each player, coach, and member of management on the Stanley Cup. As bands are filled up, they are removed and set on display in the Hockey Hall of Fame.

I have never seen my favorite hockey team win the Stanley Cup. The New York Rangers came close in 2012, 2014, and 2015. Losing to the Kings in the 2014 Stanley Cup finals is one of the most heartbreaking moments of my sports fandom. I dream of the day the Rangers win the Stanley Cup again.

Like I said in the opening paragraph, the 16 wins required to win the Cup are the 16 hardest wins of a player’s NHL career. It takes so much out of you as a player (not that I would know personally), but that accomplishment and glory lives on forever. At the tail end of the Islanders 4-peat in the ’80s, a young Wayne Gretzky and Mark Messier walked to the Islanders dressing room to congratulate them. Expecting to find them partying, Gretzky and Messier found a silent locker room of exhausted Islanders. That was the moment they realized what it took to win the Cup. They realized how much you have to give and that you have so little left that you can’t even celebrate in your own locker room. Gretzky and Messier went on to win 5 and 6 cups each respectively, and five of them together.

Every year, no matter who it is, my dad still gets tears in his eyes when the Cup is presented. He said the memories of ’94 and all of the times the Rangers came close when he was a kid come flooding back and he is overtaken with emotion. Hockey is more than a game in my family. The memories of Rod Gilbert and Eddie Giacomin coming so close, but never winning come right back. In addition, my grandfather grew up in Montreal watching those great Canadiens teams with Rocket Richard and Jacques Plante. My grandfather instilled a love of the game in my dad, who instilled a love of the game in me and my brothers. The Rangers are back in the playoffs after a five-year hiatus. They have a real chance to win the Cup this season. The memories of the 2012-2016 teams have come back and made me think just how close they came.

The Stanley Cup is more than a trophy. The history, traditions, and emotions it brings out give the Stanley Cup a personality; it comes alive. That is what makes the Stanley Cup special. That is why it is the most coveted trophy in North American sports. At times, there are no words to truly describe it. Why? Because it’s the Cup.